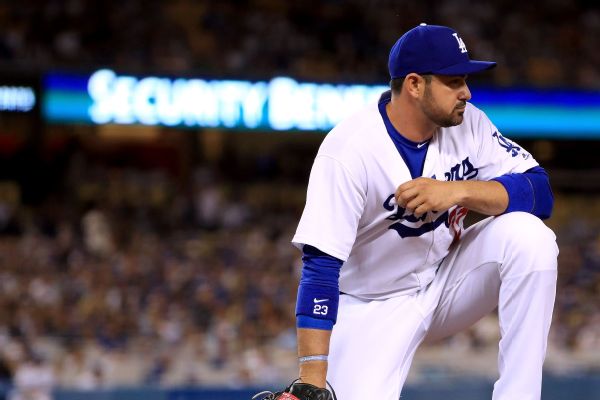 Los Angeles Dodgers first baseman Adrian Gonzalez says he isn't setting a target date for his return from a herniated disk and is prepared to miss the next month rehabbing the injury.

Gonzalez, who was placed on the disabled list June 13, said he could return to the team in late July.

"This time around, I'm not going to rush," Gonzalez said Tuesday, according to the Los Angeles Times. "Obviously, I felt fine, but then the more baseball I [played], the more it started to stiffen up. I think slower is better than faster right now, at this point."

When Gonzalez went to the DL, manager Dave Roberts said he didn't know when the 35-year-old would be back. On Tuesday, Roberts said the team remains hopeful Gonzalez would return before the All-Star break, which begins July 10.

Cody Bellinger has handled first-base duties in Gonzalez's absence. The rookie is off a torrid start to his major league career, leading the National League in home runs with 22.He has 10 homers over his past 10 games.

Gonzalez recently received an epidural to aid in his recovery. He has been on the disabled list twice this season -- his first two DL stints in his 14-year career -- and is unsure of his future after his contract expires after the 2018 season, when he will earn $21.5 million.

"I want to get back this year to help the team and for me to be healthy," Gonzalez said Wednesday. "But I'm thinking more long-term about being able to play more years.

"I'm looking for - can I extend my career the way it should be for the next two, three years?" Gonzalez said. "If I can't - if it's not going to get any better, if it's just going to continue to get worse - then I'll play out my contract the way I can and that's it."