'It's simply a matter of when': Santa Ana SWAT trains for active-shooter situation 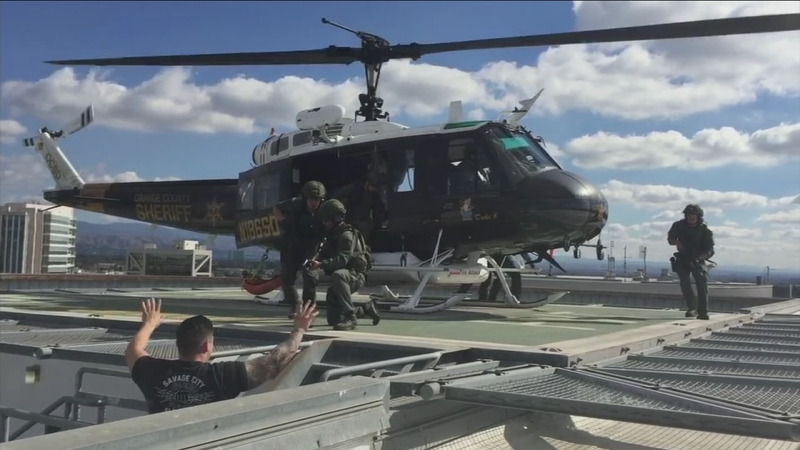 'It's simply a matter of when': Santa Ana SWAT trains for active-shooter situation

SANTA ANA, Calif. (KABC) -- Members of the Santa Ana police SWAT team and the Orange County sheriff's air support participated in drills, preparing them to deal with an active-shooter situation.

SWAT operators loaded into an Orange County Sheriff's Department helicopter, then were flown to a rooftop in downtown Santa Ana. They were given a scenario that a gunman was in the building and several victims were on the roof.

The training was geared to help them respond quickly to a dangerous situation. "Anytime you have one of these active shooter events, any type of threat, seconds matter and to be able to provide that resource immediately is important," said OCSD Sgt. William Fitzgerald.

The training was inspired by the Pulse nightclub shooting in Orlando and other mass shootings that followed, including the Route 91 Harvest Festival in Las Vegas and the recent church shooting in Sutherland Springs, Texas.

"It's not a matter of if, it's simply a matter of when and unfortunately that's the mindset," said Santa Ana police commander Eric Paulson.

The SWAT team also practiced rappelling into a hostile situation at the Main Place Mall. Training officers want to make sure their teams are ready for anything.

"We may not be able to get in through typical means, typical doorways, typical stairwells so we always have to consider alternate ways to make entry," said Paulson.

While they train for the worst, these officers remind the public to stay vigilant and watch for suspicious behavior. "When we see these things happening in Las Vegas, Texas, anywhere across the nation, you know in your mind this very well could be your community next." said Paulson.