KGO
The hashtag #StandWith Keaton continues to trend on social media. But now, some people say they don't stand with the middle schooler from Tennessee, despite his moving plea.

Keaton's mom Kimberly first posted the video on Friday on her Facebook page recounting how kids would pour milk on her son, making him afraid to go to lunch.

Since then, celebrities have flocked to support him. University of Tennessee quarterback Jarrett Guarantano spent the day with Keaton yesterday and tweeted, "Now I have the little brother I always wanted."

Stay strong, Keaton. Don’t let them make you turn cold. I promise it gets better. While those punks at your school are deciding what kind of people they want to be in this world, how would you and your mom like to come to the Avengers premiere in LA next year? https://t.co/s1QwCQ3toi

But backlash is growing after pictures surfaced on social media of the family posing with Confederate flags.

So I got the chance to spend the day with my new best bud Keaton. It was unbelievable to get to know him and realize that we have a lot in common. This dude is very special and has changed my life forever. Now I have the little brother I always wanted! God bless you my man pic.twitter.com/vMHVtnf2rC

In an interview with "Good Morning America," Kimberly Jones responded to online accusations of racism by saying: "That's not who we are."

"I feel like anybody who wants to take the time to ask anybody who I am or even troll through some other pictures, I mean I feel like we're not racist," the boy's mother said. "I mean, people that know us, know us."

She said the photo "was meant to be ironic and funny and extreme," she added. "I am genuinely, truly sorry. If i could take it back I would."

But Actor Patton Oswalt from ABC's "Agents of SHIELD" said, "Keaton didn't get to choose the family that raised and shaped him -- how 'bout showing him that people of all races and creeds can come together?"
Related topics:
societycelebrityviral videocontroversial videobullyingu.s. & worldanti bullying
Copyright © 2020 KGO-TV. All Rights Reserved.
RELATED 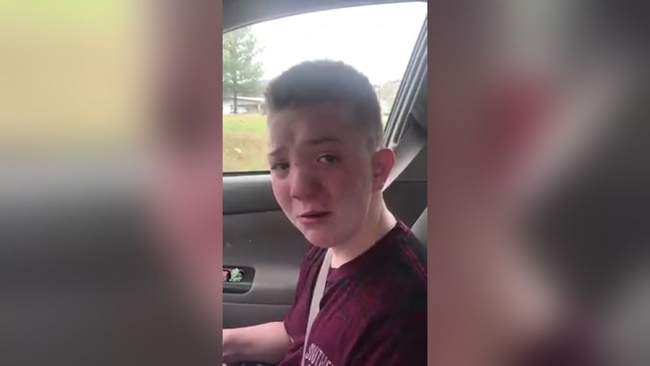