Three firefighters were discharged from the hospital and officials say a 12th firefighter was also injured in an explosion and fire Saturday night.
KABC
By Jade Hernandez and Leanne Suter 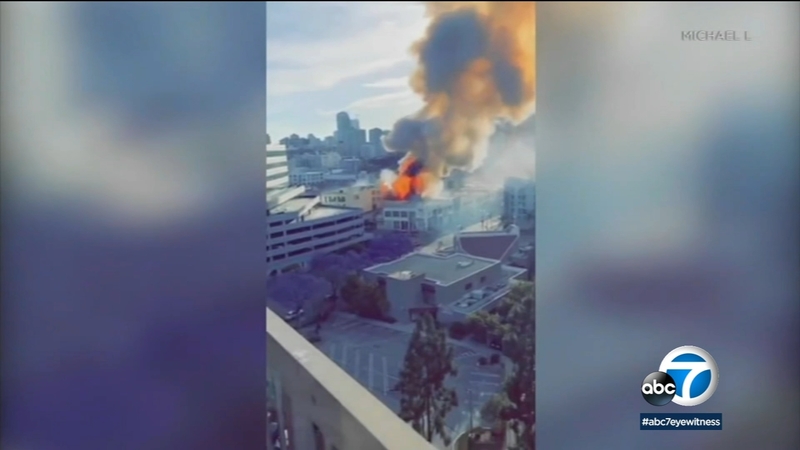 LOS ANGELES (KABC) -- Three firefighters were discharged from the hospital as of Sunday morning and officials say that a 12th firefighter was also injured in an explosion and fire in downtown Los Angeles the previous night.

Officials initially said 11 firefighters suffered burn injuries in Saturday's incident and subsequent fire, but later said that another one was treated and released for a "minor extremity injury," according to the Los Angeles Fire Department.

Later Sunday night, officials said the two in critical condition, who had been intubated, had recovered enough to be taken off the ventilators.

As of 0900, 3 @LAFD #firefighters have been discharged from LA County-USC hospital. 8 remain hospitalized including 2 in critical but stable condition. A 12th firefighter was treated and released at the emergency room last night for a minor extremity injury. pic.twitter.com/jmXfA5GRUt

A cause for the blaze has not been officially determined but fire officials said it began at the site of a butane honey oil supplier, Smoke Tokes Warehouse Distributor. Chief Ralph Terrazas said an on-scene investigation has to be completed, which will take several days.

The building was full of highly flammable butane canisters, but officials say there were no signs on the building warning of the danger inside.

The Bureau of Alcohol, Tobacco, Firearms and Explosives is joining the search for what sparked the fire in what may become a criminal investigation.

Chief Terrazas said upon arrival, the blaze was described as having moderate smoke. The smoke pressure was escalating when firefighters entered the building. They were directed to get out of the building, which is when the explosion or flash occurred.

A Mayday call came over radio, and within minutes, all 11 of the injured firefighters were transferred to Los Angeles County-USC Medical Center.

More than 230 firefighters responded to the blaze. Fire officials said the fire was knocked down just after 8 p.m.
EMBED More News Videos