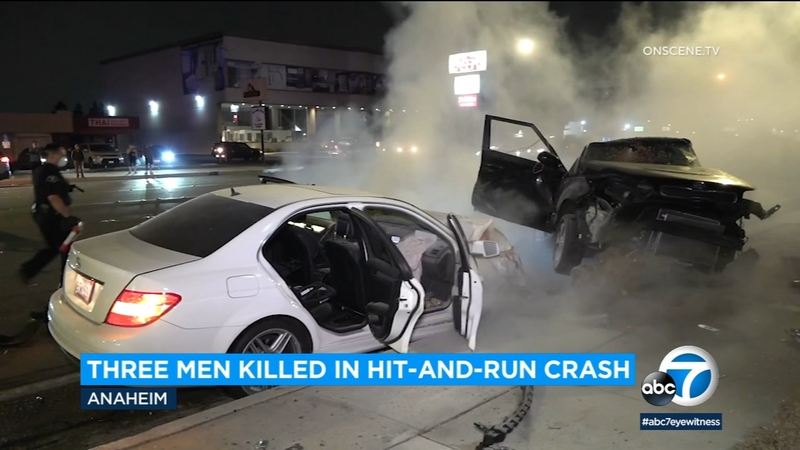 The two-vehicle collision was reported around 2:45 a.m. near the intersection of Brookhurst Street and Orange Avenue, according to Anaheim police.

Firefighters arrived at the scene to find a white Mercedes-Benz on fire after it collided with a black Kia Sol.

According to investigators, the driver of the Kia pulled out from a shopping center parking lot and was then hit on the driver's side by the Mercedes. Surveillance video captured the collision.

Authorities said the two occupants of the Mercedes were later found at a nearby hospital after fleeing the scene.

The three deceased men, who were in the Kia, were not immediately identified.

Police did not immediately confirm whether the Mercedes was street racing -- which some witnesses suspected to be the cause of the crash, adding that illegal racing is a recurring problem on the busy stretch of road where the crash happened.

Police say charges are likely, but not definite.

"We will take into consideration whether they were leaving the scene for the purposes of seeking medical attention," said Anaheim police Sgt. Shane Carringer. "As a passenger, you don't have an obligation to stay on scene of a collision. But as a driver, you do."

Investigators have not yet confirmed if the Kia was a rideshare vehicle, as some witnesses stated at the scene, adding that the deceased victims had just been picked up.

A stretch of Brookhurst Street remained closed as the investigation continued.