Teachers' union to strike Jan. 10 if no agreement reached with LAUSD 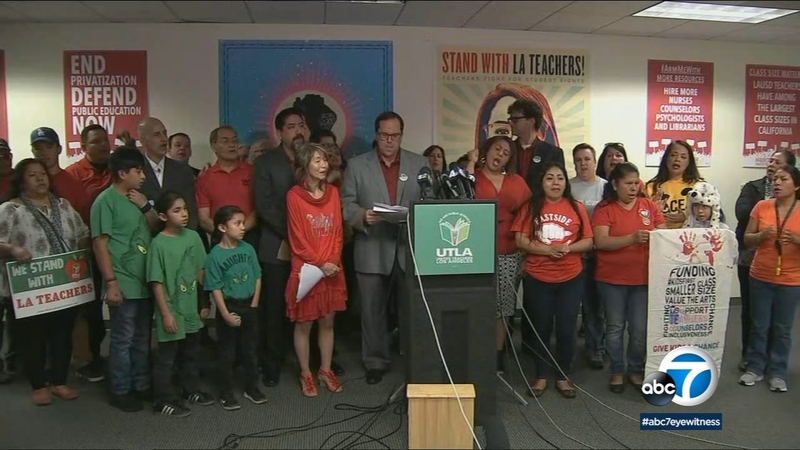 Teachers' union to strike Jan. 10 if no agreement reached

LOS ANGELES (KABC) -- The president of United Teachers Los Angeles said Wednesday morning that the union will go on strike Jan. 10 if a labor deal is not reached with the Los Angeles Unified School District.

Alex Caputo-Pearl, flanked by teachers and students, announced the strike date at a morning press conference amid an ongoing contract dispute between UTLA and the district.

"Our bargaining proposals, from the beginning of this process 20 months ago, have been an attempt to save public education in Los Angeles, to make thriving schools in L.A. for the students of L.A.," Caputo-Pearl said.

"In contrast, Austin Beutner continues to try to buy us off by focusing exclusively on salary," Caputo-Pearl added, referring to the superintendent. "As we've said for months, we will not be bought off."

#breaking Teachers union says it will strike on January 10th unless it sees big changes from LAUSD #lausd pic.twitter.com/tg5ajYRUub

The LAUSD did not immediately respond to the union's strike date announcement.

The California Public Employment Relations Board issued a complaint against the teachers' union saying it's actually the one refusing to bargain in good faith. The union dismissed that.

"The district made complaints, PERB received them and basically says that they're going to hear it out," Caputo-Pearl said.

After months of negotiations the two sides are at an impasse. According to an independent report a proposal by LAUSD for a 6-percent salary increase is appropriate but the union disagrees. The independent report also said the LAUSD has a large a recurring budget deficit. This year it will be half of $1 billion. The union wants LAUSD to spend from its nearly $2 billion reserve fund. The district spoke about that on Tuesday.

"We're spending that. Our operating deficit is big and growing," Beutner said. "In about two years, that reserve will be gone."

Beutner publicly released a copy of a fact-finding report that said the district and teachers had agreed to a pay raise.

According to the LAUSD, the union had twice communicated acceptance of a 6-percent salary offer included in the report -- once by a union representative on the fact-finding panel and again through a UTLA Facebook post saying that a massive union march in downtown Los Angeles on Saturday was held to demand, in part, "a 6-percent pay raise."

"Los Angeles Unified remains committed to bargaining with UTLA and believes the fact-finder report can provide the basis for reasonable settlement of the remaining items and hopes UTLA will engage in good-faith bargaining to find an agreement," the district said in a statement. "Los Angeles Unified does not want a strike -- which only UTLA can authorize -- as a strike would harm students, families and communities most in need."

UTLA responded by saying no agreement -- regarding pay or any other matters -- was in place.

One parent said a strike would be difficult for her, and she is not sure what to do if her daughter can't go to school. Her daughter, Keila Gomez, said her school needs more nurses.

"There's only a nurse on two days of the entire week, and it's like saying, 'You can only get hurt on these two days,'" Gomez said.

The teachers' union said its negotiators will not be returning to the bargaining table. It said the next move is up to the LAUSD.