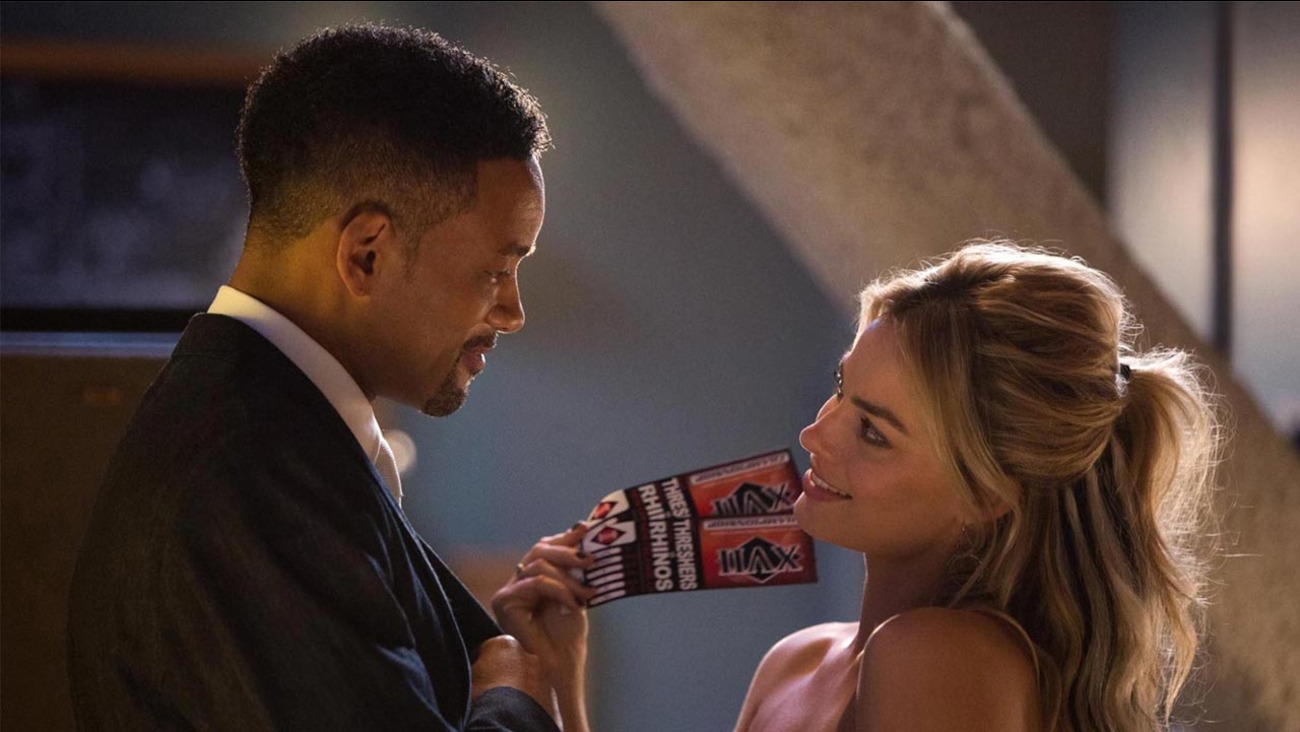 Will Smith and Margot Robbie star in the con-man caper "Focus," which dethroned "Fifty Shades of Grey" at the box office. (facebook.com/FocusMovie)

NEW YORK -- Will Smith's con-man caper "Focus" dethroned "Fifty Shades of Grey" at the box office, but the film's modest $19.1 million opening still left questions about the drawing power of the once unstoppable star.

According to studio estimates Sunday, Warner Bros.' "Focus" easily topped all competitors on a weekend with little competition at North American multiplexes. In second place was the Colin Firth spy thriller "Kingsman: The Secret Service," which made $11.8 million in its third week of release.

After two weeks atop the box office, "Fifty Shades of Grey" continued its steep slide, landing in fourth with an estimated $10.9 million for Universal Pictures. "Fifty Shades," which has made $486.2 million globally, fell just behind Paramount's "The SpongeBob Movie: Sponge Out of Water," which earned $11.2 million in its fourth week.

The weekend's only other new wide release, Relativity's horror film "The Lazarus Effect," opened in fifth place with $10.6 million.

But the weekend was largely seen, fairly or not, as a referendum on Smith's star power. "Focus," written and directed by the "Crazy, Stupid, Love" duo Glenn Ficarra and John Requa, is Smith's first film since 2013's "After Earth," the sci-fi flop in which he co-starred with his son, Jaden.

Smith has been frank about the sting of that film's box-office performance. "I can't allow the box-office success, or lack thereof, to determine my self-image," he said in a recent interview with The Associated Press.

But "Focus," made for about $50 million and co-starring Margot Robbie of "The Wolf of Wall Street," was never intended to be a summer-sized blockbuster. It had been predicted to make around $21 million.

"This is a mid-budgeted film with a result that matches," said Jeff Goldstein, head of distribution for Warner Bros., who added that winter storms accounted for a drop of $1-2 million. "There's no question we got hammered because of inclement weather in the South and the Midwest."

The R-rated "Focus," overwhelmingly appealed to adults, with 88 percent of its audience older than 25 - not a good sign for Smith's appeal to a new generation of moviegoers who weren't around for his triumphs in "Independence Day."

Nevertheless, there aren't many stars who could do better with a drama in late February. And "Focus" should play well internationally, where Smith's popularity remains strong.

"This still goes on his balance sheet as a number one debut," said Paul Degarabedian, senior media analyst for box-office data firm Rentrak. "He can still draw an audience, particularly with a film that's R-rated and not aimed at the young crowd."

Some of last Sunday's Oscar winners saw slight bumps at the box office.

Best-picture winner "Birdman (Or the Unexpected Virtue of Ignorance)" added some 800 screens to bring in $2 million over the weekend, pushing its total past $40 million. "Still Alice," for which Julianne Moore won best actress, added 553 screens and earned $2.7 million. It's now made $12 million for Sony Pictures Classics.

"American Sniper," far and away the biggest box-office hit of the best-picture nominees, was also easily the top post-Oscars draw. It added another $7.7 million, to bring its cumulative domestic gross to $331.1 million.