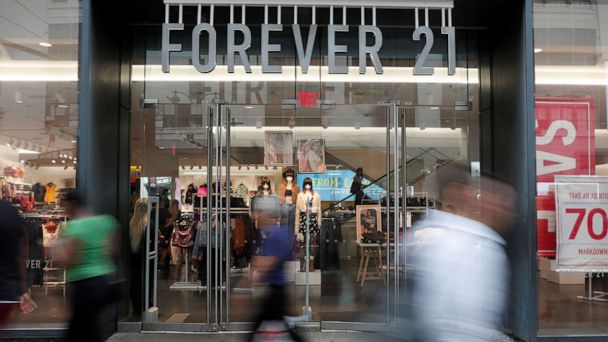 The fast-fashion chain Forever 21 filed for chapter 11 bankruptcy, joining a rising number of brick-and-mortar retailers shuttering or downsizing in an increasingly e-commerce world.

The company announced the bankruptcy filing Sunday night in a statement and announced a "global restructuring" that will involve them closing most of their international locations in Asia and Europe. "This was an important and necessary step to secure the future of our Company, which will enable us to reorganize our business and reposition Forever 21," executive vice president Linda Chang said in a statement.

Founded in 1984, Forever 21 has approximately 600 stores in the U.S. The bankruptcy filing means that the company will close up to 178 U.S. stores, according to the Associated Press.

The company also said they obtained several loans -- including a $275 million loan from JPMorgan Chase Bank -- that will allow them to operate in a "business as usual manner" and honor all company policies including gift cards, returns and more.

This financing will "arm Forever 21 with the capital necessary to effect critical changes in the U.S. and abroad to revitalize our brand and fuel our growth, allowing us to meet our ongoing obligations to customers, vendors and employees," Chang added, saying they are "confident we will emerge as a stronger, more competitive enterprise that is better positioned to prosper for years to come." Forever 21 joins a growing list of brick-and-mortar retail brands that have struggled in recent years with the rise of e-commerce giants such as Amazon.

The fall of one-time retail giants goes as far back as October 2018, when Sears filed for chapter 11 bankruptcy and said they were closing over 100 stores.