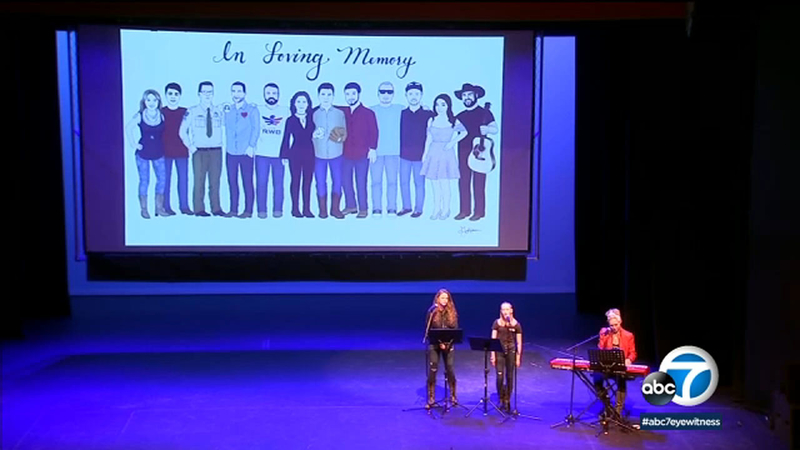 THOUSAND OAKS, Calif. (KABC) -- The Ventura County community came together Friday for a night of remembrance and reflection one year after the Borderline mass shooting and the Woolsey Fire.

There were powerful stories shared of grief and despair.

But there were also messages of hope and love as the community sought to move forward together.

Among the many heartbreaking tales, a firefighter spoke poignantly about first responding to the shooting one night and then getting called the next day for a physically and emotionally draining shift battling the massive blaze.
Ventura County firefighter Chris Sharp recalled pulling up to the "chaos" and "mayhem" outside the bar that night.

Sharp had to pause several times to gather his emotions as he recalled that night. As he spoke, the audience could be heard softly sobbing.

One of the first victims he had to treat was Sgt. Ron Helus, who had been shot multiple times.

"As we got out of the rig a sheriff's car comes racing down the street right at us. I felt like he was gonna hit us. He was doing 100 mph. He locks up his brakes right at us, he jumps out and says, I got somebody in the back."

"We open the door and Sgt. Helus was in the back."

After some treatment at the scene, Helus was transported to a hospital. He was later pronounced dead.
After the ambulance took Helus away, Sharp and other firefighters had to work quickly to enter the bar, assess the devastating scene and find out if anyone was still alive.

"Our job was to look for life. So that's what we tried to do. We laid our hands on everyone who had fallen inside. We touched every person inside there."

"I remember walking in and it was very smoky. And there was a Laker game on the TV right there. It was just so surreal for what we were looking at."

"And we looked for life. And didn't find any."

Ventura County firefighter Chris Sharp gave a poignant recollection of the night he and other first responders assessed the devastating scene at the Borderline Bar and Grill one year ago.