KABC
By ABC7.com staff
STEVENSON RANCH, LOS ANGELES (KABC) -- A 2-year-old girl has died two days after a fiery crash in Stevenson Ranch that left her 6-year-old sister dead and their mother -- who was found naked inside the wrecked vehicle -- hospitalized with major injuries, authorities said.

The younger child's death was confirmed by a spokesperson for the California Highway Patrol's Newhall office. Her name was not immediately released.

Her sister, Kathleen Lopez, succumbed to her injuries on the day of the crash and was identified Wednesday by the Los Angeles County coroner's office.

According to investigators, the family's car was involved in an initial crash on The Old Road just south Pico Canyon Road shortly before 9:45 a.m. Monday The driver then ran a red light and slammed into a power pole at the intersection, the CHP said.

The mother, who has not been publicly identified, was listed in stable condition.

The cause of the crash is under investigation, the Highway Patrol said. No citations or arrests were immediately announced.
Report a correction or typo
Related topics:
stevenson ranchlos angeles countycar crashnaked womanchild deathnaked in publicfatal crash
Copyright © 2021 KABC-TV. All Rights Reserved.
RELATED 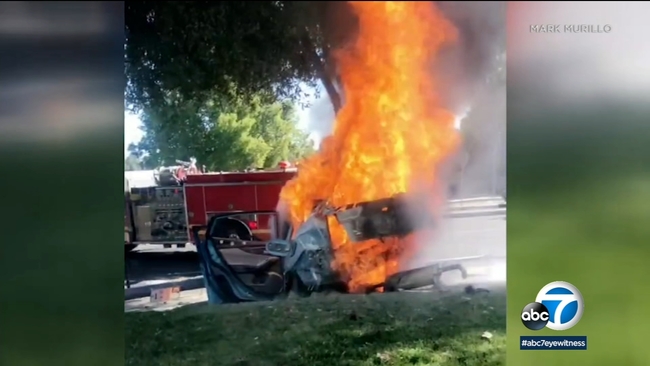