State of the Union 2020: Democratic Women's Caucus wears white in show of solidarity 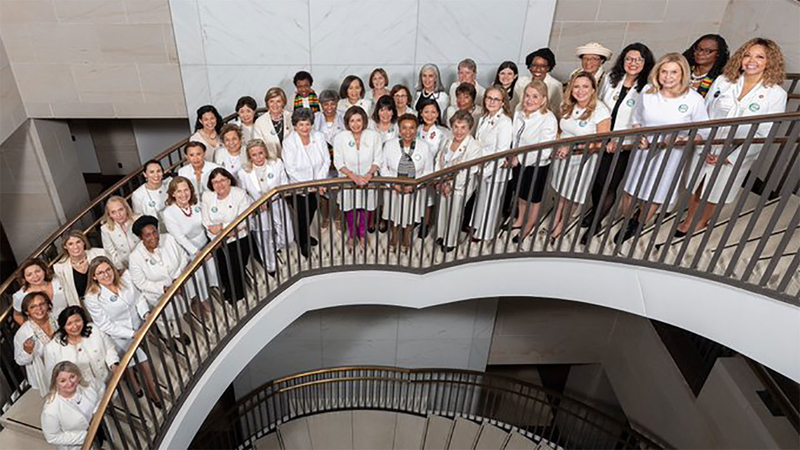 Democratic women wear white to SOTU in show of solidarity

WASHINGTON -- Members of the Democratic Women's Caucus wore white to the State of the Union Tuesday night in a show of solidarity.

In a tweet, the caucus said its members wore white "to show our persistence as we fight #ForThePeople...to stand against @realDonaldTrump's dangerous policies...to make sure the voices of women and families are heard...and to let @POTUS know that we're not backing down."

💪To show our persistence as we fight #ForThePeople.
🙅‍♀️To stand against @realDonaldTrump’s dangerous policies.
👪To make sure the voices of women and families are heard.

And to let @POTUS know that we’re not backing down. #SOTU pic.twitter.com/d4U4Z85xaO

SEE ALSO: How to watch the 2020 State of the Union live

White is commonly associated with the women's suffrage movement. This August will mark the 100th anniversary of the ratification of the 19th amendment, which gave women the right to vote.

Some also are wearing green Equal Rights Amendment pins ahead of an expected House vote on the issue this month. Look, too, for red-white-and-blue-striped lapel pins to highlight climate change.

The Associated Press contributed to this report.
Report a correction or typo
Related topics:
politicswashington d.c.democratscongressstate of the union
Copyright © 2021 KABC-TV. All Rights Reserved.
STATE OF THE UNION