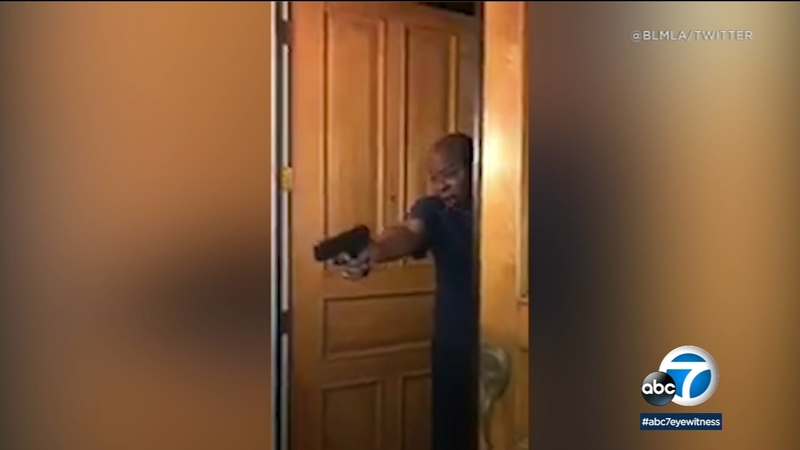 GRANADA HILLS, Calif. (KABC) -- The husband of the Los Angeles County district attorney pulled a gun on Black Lives Matter activists in a video captured outside of the couple's Granada Hills home before dawn Monday, just one day before the California primary.

A tearful Jackie Lacey said during a press conference hours after the incident that the gathering of protesters at her home awakened her and her husband, David, and he reacted out of fear but was "profoundly sorry'' for brandishing a gun. She said he ran downstairs, where she heard him talking to someone, and that when he came back, he said there were demonstrators outside.

She said he told her: "I pulled my gun, and I asked them to leave."

Cell phone video shows David Lacey wielding the weapon while threatening to shoot the protesters if they did not leave the property.

The husband of the Los Angeles district attorney is accused of pulling a gun on Black Lives Matter activists in a video captured outside of their Granada Hills home Monday morning.

The footage was tweeted just before 6 a.m. by Melina Abdullah, a Black Lives Matter organizer. The video was also tweeted by Jasmyne Cannick, a candidate for the Los Angeles County Central Committee and a spokesperson for former LA County public defender Rachel Rossi, Lacey's opponent in the election for the largest local prosecutor's office.

Cannick said in a tweet that the group was protesting Lacey in front of her house after she failed to meet with Black Lives Matter. During the protest, her husband opened the door and threatened to shoot Abdullah, who is heard speaking off-camera.

"Can you tell Jackie Lacey that we're here?" Abdullah said.

"I don't care who you are, get off of my porch right now. We're calling the police right now," he said while lowering and then raising the gun before closing the door.

Of her husband, Lacey said, "His response was in fear, and now that he realizes what happened, he wanted me to say to the protesters, the person that he showed the gun to, that he was sorry, that he was profoundly sorry." She said she also was sorry.

The district attorney said she has received death threats and has been followed, photographed and confronted repeatedly. She said she expects people to exercise their First Amendment rights, "but our home is our sanctuary."

"I do not believe it is fair or right for protesters to show up at the homes of people who dedicate their lives to public service," Lacey said. "I just want to live in peace and do my job."

The Los Angeles Police Department confirmed that officers were called to the home around 5:40 a.m. in response to roughly 50 protesters outside. Authorities say no arrests were made, but LAPD is investigating. If appropriate, Lacey said the case will be brought to an independent prosecutor's office for review. In addition, the California Attorney General's Office will assist the LAPD in the investigation.

Just ahead of Election Day, a group of Black Lives Matter activists gathered outside the home of Los Angeles' top prosecutor Jackie Lacey.

Black Lives Matter members and other black community leaders held a news conference regarding the incident one hour after Lacey spoke to the press.

One Black Lives Matter representative said the group was "traumatized" by David Lacey aiming at them.

Meanwhile, Abdullah said said the group has tried to meet with Lacey in a public forum for the past two years to no avail.

"She has refused to engage the public that has elected her, and it's her duty to do so. And if she won't do it, what choice does the public have?" she said.

However, Lacey said she has offered to meet with Black Lives Matter one on one or in a small gathering but the group has rejected those options.

Lacey is up for a third term as L.A.'s chief prosecutor in a tough battle former San Francisco DA George Gascón. Rossi is also vying for the job but is being outspent by the top two contenders, who also boast more influential endorsements.

The race is nonpartisan and will be decided if one of the candidates receives more than half the primary votes on Tuesday. If no one achieves a majority, the top two will face off in November.

Rossi criticized Lacey's reluctance to meet with the protesters.

Lacey has faced heat for the racial disparity in county jails, high incarceration rates and her position on the death penalty despite Gov. Gavin Newsom's moratorium on the punishment.

Members disrupted a debate in late January, chanting "Jackie Lacey must go" during Lacey's response to the incarceration rate of people of color.. The group - including relatives of those killed by police - has protested outside Lacey's office weekly for more than two years.