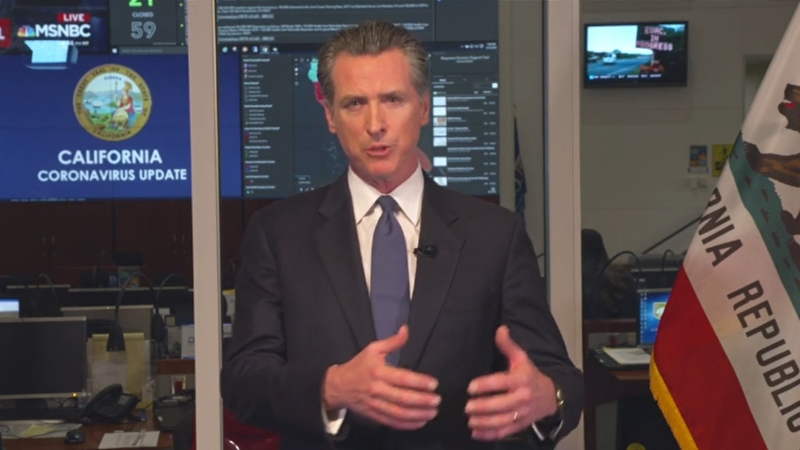 LOS ANGELES (KABC) -- Amid the nationwide economic slowdown triggered by the coronavirus crisis, Gov. Gavin Newsom has issued an order aiming to add new protections for Californians against evictions, foreclosures and utility shutoffs.

Newsom is giving local governments broad powers to limit residential and commercial evictions through May 31. The order does not mean tenants don't owe the rent or landlords can't try to collect rent due, but it could temporarily limit their ability to evict tenants who can't pay.

The governor is also requesting banks and other financial institutions to implement a moratorium on foreclosures if the issue stems from a loss in income tied to the coronavirus outbreak and government responses.

It also asks the California Public Utilities Commission to monitor utilities and what protections they are undertaking for their customers.

"People shouldn't lose or be forced out of their home because of the spread of COVID-19," said Governor Newsom. "Over the next few weeks, everyone will have to make sacrifices - but a place to live shouldn't be one of them. I strongly encourage cities and counties take up this authority to protect Californians."

His move to stem evictions comes a day after he issued a call for all bars in the state to close.

Newsom is also asking all Californians age 65 and older and those with chronic conditions to isolate themselves at home.

"We are calling for the home isolation of all those 65 years or older and all those with chronic conditions," Newsom said Sunday.

He said all bars, wineries, nightclubs and brewpubs should be closed.

Restaurants, he said, can remain open but to enforce "deep social distancing," their permitted occupancy should be cut in half. There should be more space between tables, he said.

"We believe this is a nonessential function in our state," Newsom said, referring to the bars. "And we believe that is appropriate under the circumstances to move in that direction."

He said the state has 5.3 million people who are age 65 or older. People in that population, as well as those with underlying health conditions, have been seen as particularly vulnerable as the virus spread worldwide into what is now considered a pandemic.

All of those people in the vulnerable populations, he said, should isolate themselves. Nursing home visits should be limited to end-of-life visitations, he said.

Newsom's call for the shutdowns was described as "guidance" rather than a legal order by the government, as some states have chosen to do. But he said he felt confident the public would voluntarily comply.

"If you want to establish a framework of martial law, we have the capacity to do that but we are not at this moment feeling that is a necessity," Newsom said.

The state has some 108,000 unsheltered homeless people who are also at higher risk for suffering complications from the coronavirus. Newsom said the state is working to acquire motel and hotel properties to convert into housing for the homeless.

The number of coronavirus cases in California has increased to 335, a 14% increase from just the day before, Newsom said.

The governor said there have been six deaths in the state related to COVID-19.

He said state labs have conducted thousands of tests and are ramping up their ability to test at a faster rate.

Newsom's announcement comes as the number of cases in Los Angeles County has increased to 69.

Worldwide, the number of cases has increased to more than 182,000 with 7,000 deaths according to data maintained by Johns Hopkins University.