KABC
By Laura Montenegro and Amy Powell
NORCO, Calif. (KABC) -- A fire near the Prado Dam Flood Control Basin has quickly spread to 300 acres and is threatening nearly 300 homes on Bluff, Homestead and Stagecoach roads on the border of Norco and Corona, according to the Riverside County Fire Department.

Firefighters responded to a report of trees on fire in the area at about 6:12 p.m. Saturday. Nearly 335 firefighters were called to the scene and two water-dropping helicopters and two air tankers were deployed.

The blaze, which was visible from State Routes 71 and 91, quickly grew. Mandatory evacuations are in place for residents living on Bluff, Homestead and Stagecoach roads. So far, no structures have burned.

"We've gotten everybody off of the bluff side of the river, and we're going to hope for the best that they stop it over there," said Lewann Hepfler of Norco. "They've asked us to stand by. They've evacuated everyone on the other side of the street."

Several agencies, including Cal Fire, the Riverside County Fire Department and the Corona Fire Department, are battling the blaze dubbed the "Highway Fire".

As of 12 a.m. Sunday, the fire was 15 percent contained and no injuries had been reported.

"Our assignment is to do structure protection here at a couple homes and make sure that the fire doesn't come out of the basin and bump the road and destroy the properties," said Cal Fire Capt. David Bell.

Jennifer Fuhrman, a Riverside County department spokeswoman, says the firefighters are being hampered by rough terrain in the area. The fire is burning thick and dry vegetation in a riverbed that hasn't burnt in years.

Many residents could be seen rushing to evacuate their families, horses and other animals from the neighborhood.

Fire officials say the changing wind direction has made it difficult to battle the blaze.

"Right now, the wind is not in our favor but we're hoping overnight that it will shift and we'll get an upper hand on it," said Cal Fire Capt. Mike Mohler. 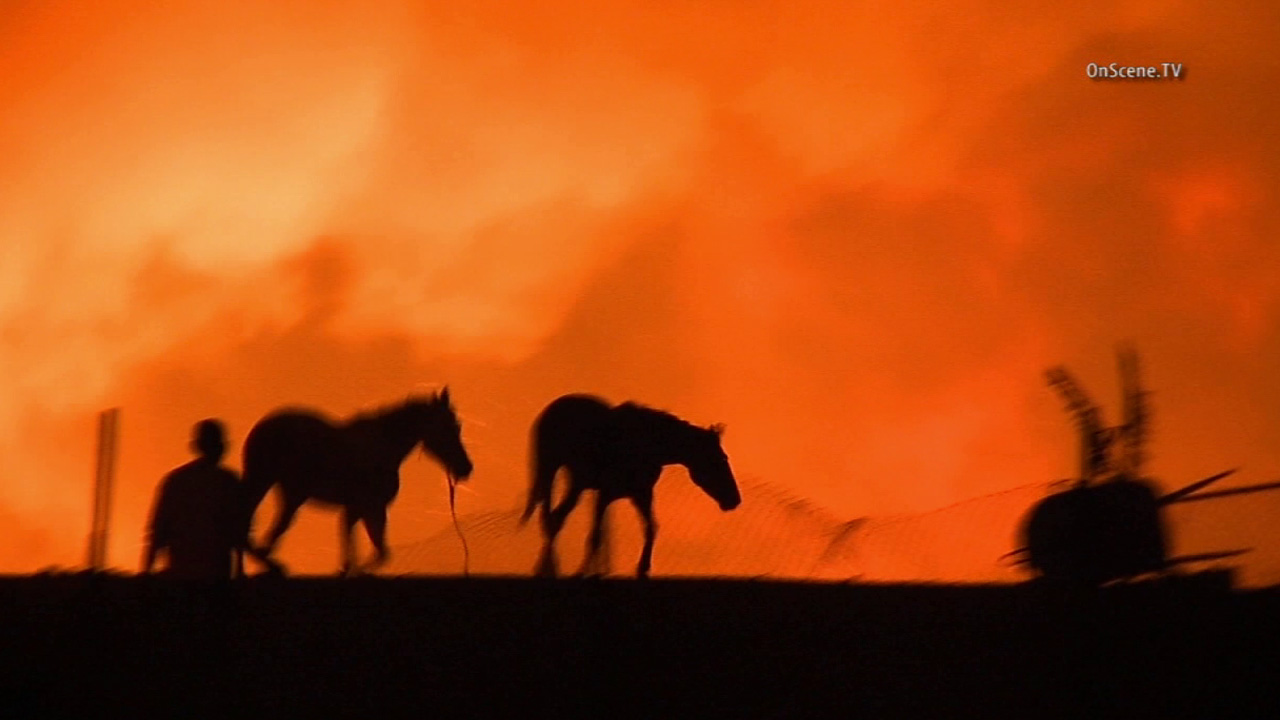 About 100 firefighters and two helicopters from the Fullerton Fire Department and Orange County Fire Authority made quick work of a 12-acre blaze near the Brea Dam in Fullerton earlier in the day.
Related topics:
chinocoronachino hillssan bernardino countynorcoevacuationbrush firefire
Copyright © 2020 KABC-TV. All Rights Reserved.
RELATED