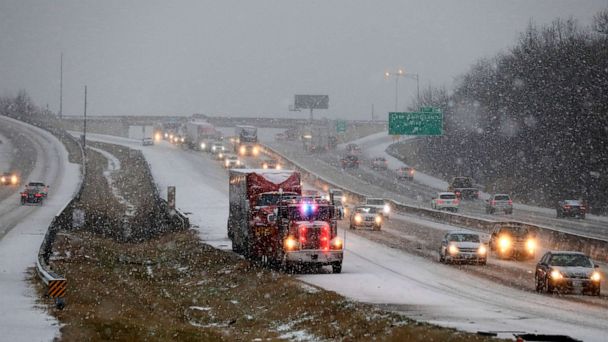 ABCNews
By REED MCDONOUGH
Yesterday, there were 387 reports of severe weather including 4 reported tornadoes in Kentucky, Mississippi and Alabama.

Record warmth hit the northeast on Saturday with Boston Logan Airport recording a temperature of 70 degrees.

Up to two inches of snow fell in Denton, Texas, yesterday. It is very rare to see snow in this part of the country -- especially right after spring-like severe weather has already impacted the region.

This morning, a major storm has moved into the East Coast with weather alerts in place for Sunday morning across 19 states from Wisconsin to Maine.

Gusty winds up to 50 mph are expected early Sunday from North Carolina to interior New England.

The center of the storm is located over New York this morning with a cold front extending as far south as the Gulf of Mexico.

The main concern this morning will shift to interior New England where ice and snow are still impacting the area along with heavy rain which may lead to some flooding issues.

As the storm pushes offshore, cold air will rush in behind the system -- we are expecting a 30 degree temperature drop from 7 a.m. Sunday to 7 a.m. Monday for some areas, including New York City.

By Sunday afternoon, the storm moves off the coast with some lingering winter precipitation in extreme northern New England and some scattered storms and rain along the cold front which will linger in an area from the Carolinas to the Gulf Coast.

As the storm continues to push offshore, it will leave behind up to 8 inches of snow in extreme northern New England and up to one inch of ice from northern New York and Maine.

Alerts remain in place this morning for nine states across the Pacific Northwest.

A series of storms are expected to hit the Pacific Northwest through the week bringing heavy mountain snow, coastal rain and extremely dangerous marine conditions with coastal waves up to 25 feet high.

By Tuesday night, up to four feet of snow will fall in high elevations, with foothill and valley snow totals ranging from 8 to 24 inches depending on elevation.

Coastal rain may reach up to 2 inches by Tuesday night and more snow and rain is expected to follow later in the week.

Over the next 24 hours we should see a drastic temperature drop in parts of the country. While temperatures are in the mid 60's this morning in New York City, they will drop to the mid 30's by this time tomorrow.
Report a correction or typo
Related topics:
abc newsnational
Copyright © 2020 ABC News Internet Ventures.
More Videos
From CNN Newsource affiliates
TOP STORIES