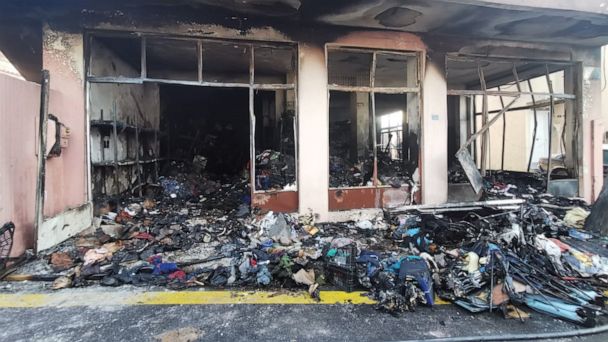 Earlier this month, Kostas Tanainis dropped off more than 100 sleeping bags, towels and blankets at the warehouse he started in 2015 to organize donations for refugees and migrants on the island of Chios, Greece.

Arrivals on the island -- just 4 miles from the Turkish border at its closest -- shot up in late February and early March as Turkey told migrants and refugees they were free to leave. Many thousands took Turkey up on that offer and made their way towards Europe by land and sea through Greece, including many who were bused to the border.

That night, Tanainis, who has been coordinating volunteer efforts on his home island for years in memory of his grandmother and father, who, as Greeks, fled via the exact sea passage today's migrants are taking about a century ago during violence between Greece and Turkey, went to sleep as he typically does, with his phone outside his bedroom, only to wake up at 6 a.m. and see scores of missed calls.

His phone rang and the person on the line asked if he had seen the news: there was a fire at the warehouse.The owner of the building lived on the second floor with his family, and their home was partially destroyed in the fire, which police have said was intentionally set.

"I cannot look at that side anymore," said Tanainis. "I mean, I didn't even go to meet him at his house upstairs because I cannot; it's too hard for me."

The fire at the warehouse that Tanainis started along with fellow local Jenny Kalipozi is one of a series of attacks organizations and people who support refugees and migrants are facing on the eastern Greek islands since protests by residents turned into riots on Chios and Lesbos after the Greek government sent riot police there. The Greek government had sent riot police to Lesbos and Chios, and protesters attacked them, including, on Chios, by breaking into a hotel where they were staying and beating them.

Lesbos, Chios and Samos have been bearing the brunt of the refugee and migrant crisis within Europe as people from Syria -- but also Iran, Afghanistan and other beleaguered regions in the Middle East and Africa -- fled west. At first, residents -- many of them descendants of refugees and migrants themselves, like Tanainis -- voluntarily stepped up to help, even as the country was working out of an economic crisis. But now years on, with overflowing makeshift camps and no solution in sight as the other European nations have largely closed their doors, public opinion has turned on the islands.

This came to a head in late February and early March as Turkey opened its borders -- and as Greece proposed the building of new reception centers on the islands.

Island residents are united in their opposition to this plan, despite their differing positions on refugees: those who support don't believe conditions will be improved for refugees and think there should be bigger changes; those who don't support just don't want more refugees and migrants on the islands.

On Lesbos, a "community center" run by a group called One Happy Family, with many partner NGOs and organizations, was targeted in an apparent arson attack last weekend. The International School of Peace, which was built in 2017 collaboratively by an Israeli Arab and an Israeli Jewish youth movement, was completely destroyed.

"There's nothing left," Fabian Bracher, a president at One Happy Family, told ABC News. "All the tables and chairs, the chalkboards, the books, the pencils, the toys, everything."

Since 2017, the school has had more than 4,000 children who were living at the overflowing migrant camp registered for classes, which ran Monday through Friday and were taught by other people living at the camp in various languages. The school had nine classrooms and, at the time it was burned down, about 200 children registered.

"We're going to have to take time to mourn and process, and then plan for the future," Bracher said, noting that this came after weeks of a "very violent and kind of aggressive atmosphere here on the island." Bracher said there has been an increase of people coming to Lesbos "to spread fascist propaganda and messages of hate," which increased tension.

Tanainis, who owns a beach bar on Chios, also runs a soup kitchen for refugees, but after the warehouse fire, the owner of the building asked him to move out. Tanainis had the gas canisters already removed from the kitchen in case someone tries to start a fire there.

Some 30-50,000 euros' worth of donations were lost in the fire, according to Tanainis, and the family who lives upstairs is facing thousands of euros of repairs.

"Now it is time to show some solidarity back to the owner," Kjetil Haga of One Family - No Borders, which currently manages the warehouse, told ABC News in an email. The group started a fundraiser on Facebook for the family that has raised over $15,000.

Although they've stopped cooking at the kitchen, Tanainis is still giving dry food out to refugees, and the atmosphere, he said, has turned "sick."

"Someone was looking at me giving food to the refugees, they were looking at me like I'm criminal," he said. "It's full of hate. This is something to worry about. But anyway, I hope that this will change, because the people are just angry and they don't know how to express their feelings."

"We still have a lot of energy, somehow, to continue," Bracher said of the work to support migrants. "We just don't want to stop. We don't want to accept the situation. We want to continue."
Report a correction or typo
Related topics:
abc newsnational
Copyright © 2021 ABC News Internet Ventures.
More Videos
From CNN Newsource affiliates
TOP STORIES