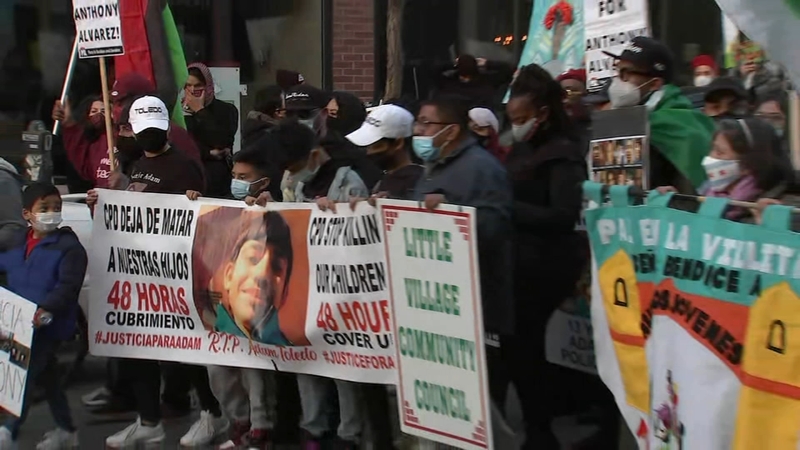 CHICAGO -- Thousands of demonstrators rallied and marched in Chicago, one day after the city released video of the Chicago police shooting that claimed 13-year-old Adam Toledo's life. The city is prepared for more protests as the weekend continues.

By 6 p.m. Friday, several hundred people had gathered in Logan Square Park with plans to march to Mayor Lori Lightfoot's house nearby, though police barricades kept them from getting too close.

The group grew to thousands as they marched through the neighborhood. Many in attendance said they were there to protest a system of policing that simply isn't working, and they wanted the mayor to hear that message.
"On social media, there's a ton of people that still deny this is even an issue, and so if you stop showing this, conversation stops," Chicago resident Gerald Parker said.

Protests break out overnight as the investigation continues into the fatal police shooting of 13-year-old Adam Toledo.

At least two people were arrested in connection with the protest.

Activists continue to call for police reform, and Mayor Lori Lightfoot said she wants Chicago police to have a revised policy in place before summer, as the Adam Toledo case has critics calling out the city for resisting reform on foot pursuits for several years.