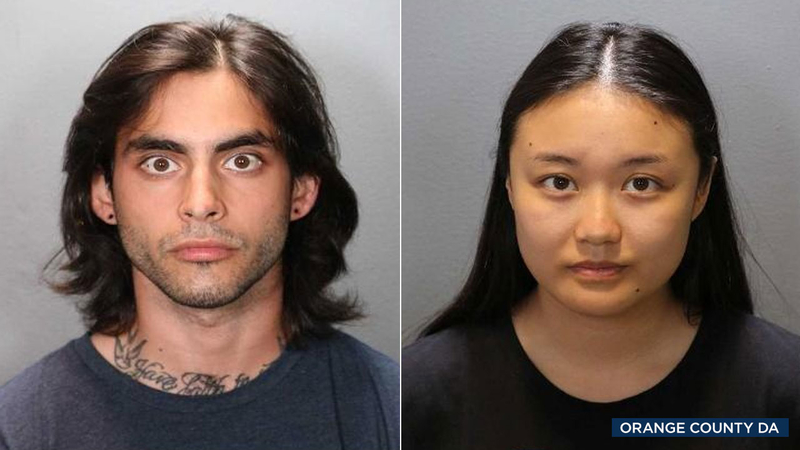 New details emerge about suspects in killing of Aiden Leos

SANTA ANA, Calif. (CNS) -- Days after the killing of 6-year-old Aiden Leos in a road-rage shooting on the 55 Freeway, the suspects got into another traffic altercation in which the alleged shooter waved a gun at another motorist, prosecutors said in court papers filed Wednesday.

Marcus Anthony Eriz, 24, and Wynne Lee, 23, are scheduled to be arraigned on Friday when Orange County Superior Court Judge Larry Yellin will consider a request from prosecutors to set bails at higher-than-usual levels.

The victim, Aiden Leos, was fatally shot May 21 as his mother, Joanna Cloonan, was driving him to kindergarten in her Chevrolet Sonic on the freeway.

About 8 a.m. that day, the two were cut off by the defendants, who were in a Volkswagen Golf Sportwagen, according to prosecutors.

Lee was behind Cloonan in the diamond lane before swinging over to the fast lane and then accelerating at an "extremely high rate of speed" to get in front of Cloonan, prosecutors said in the motion.

"Wynne Lee motioned to the victim vehicle a 'peace sign' with her hand and continued driving," prosecutors said in the motion for higher bail.

A few miles later as Cloonan was attempting to merge over to the 91 Freeway east she passed the defendants and was still angry about being cut off and she put up her middle finger at the two as she passed,'' prosecutors said.

"She then heard a loud bang to the rear of her vehicle and heard her little boy in the backseat say, 'Ow,'" prosecutors said.

In an interview with investigators on June 6, Eriz said he "was angry after being 'flipped off' by Ms. Cloonan, so he grabbed his loaded Glock 17 9mm and racked a round," according to the motion.

"He then rolled the passenger window down and took a shot at her vehicle. After shooting the victim, the defendants continued on to the 91 eastbound and on to work in the city of Highland."

During the week of May 24-28, the two got into another "altercation on the freeway," prosecutors said.

"As Wynne Lee was driving on the 91 eastbound on the way to work with defendant Eriz as her front passenger, a driver in a blue Tesla did something to make defendant Eriz angry, acting aggressively," prosecutors alleged.

"Defendant Eriz again took out his gun and brandished it to the driver of the Tesla. That driver told the defendants that he had called the police and then he drove away."

Eriz "claims that at that time, he looked on the internet and saw the story about Aiden Leos' death," prosecutors alleged. "He said he 'immediately' knew he was responsible for the boy's death. He then told Wynne Lee about his revelation."

Prosecutors allege that after May 28 Eriz hid the Volkswagen at a family member's garage and did not drive it again, instead driving his red truck to and from work.

Eriz shaved his "substantial beard" on June 3 and "started to wear his long hair back in a tie," prosecutors said.

The couple also applied for a new job after May 28, prosecutors said.

Prosecutors argue that Eriz is an "extreme danger to the community" who has "shown that he cannot control his temper and he goes to extremes in the snap of a finger when he is angered."

Eriz has "multiple firearms in his possession," including an "AR, a revolver and the Glock 17 that was used in this murder," prosecutors argued.

"He has various photos and videos on his social media that show him shooting different kinds of guns," prosecutors said. "He is also a skilled shooter as evidenced by those same videos. He admittedly and regularly carried his loaded Glock with him on his person and in Ms. Lee's vehicle while they drove to work."

Taking his guns away would not deter the defendant from using another weapon, prosecutors argued. Also, putting him on GPS monitoring would only tell investigators where he was when he "commits his next crime of violence," prosecutors argued.

Lee is also a danger to the public because she knew Eriz had his loaded gun in her vehicle and never pulled over to check on Cloonan following the shooting, prosecutors argued. She also failed to call 911 "or do anything to follow up about what her passenger had done," prosecutors said.

She was driving during the next altercation on the freeway as well, prosecutors said.

Both defendants were originally being held on $1 million bail, but Yellin tentatively increased Eriz's bail to $2 million, and dropped Lee's bail to $500,000.

Those bail amounts, which were requested by prosecutors, will remain in place until Friday's arraignment, when attorneys will present their arguments to keep the bails at $2 million and $500,000.

Bail could potentially be reduced further for Lee, who was originally booked on suspicion of murder but was only charged with being an accessory, Yellin said.