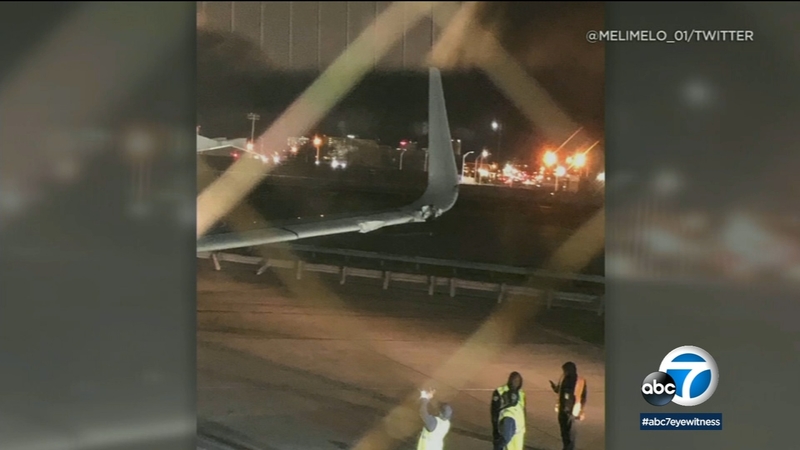 NEW YORK -- An American Airlines flight was forced to return to JFK Airport Wednesday night after it clipped its wing upon departure.

The FAA says Flight 300 that was bound from New York to Los Angeles landed safely at 9:09 p.m.

The pilot reported that the Airbus 321 may have collided with an object during departure. Pictures of the damaged wing were taken by passengers on board.

American Airlines says the flight took off from Kennedy at 8:40 p.m. but returned a short time later.

After the aircraft landed, workers discovered damage to the left wing, caused by striking a runway sign on departure.

According to a passenger, the plane went sideways after takeoff and the pilot had to straighten it out.

"The plane veered left when it hit something and then it took a sharp right turn at takeoff where I was on the right side of the plane and I was looking straight down at the ground," said Scott Laser, a passenger. "I cried the whole way back and many others did also."

The plane was in the air for about 15 minutes before the pilot announced that they were heading back to JFK. There were 101 passengers and eight crew members aboard at the time of the incident.

"The person next to me grabbed my arm, the person on the other side of me grabbed my arm and everyone just kind of held on really tight. It was, really, a terrifying moment for everyone," said passenger Oran Revivo.

The FAA is investigating. They released a statement saying, "The pilot reported that the Airbus 321 may have collided with an object during departure...workers discovered damage to the left wing, possibly caused by striking a runway sign and airport light departure."

The flight which took off at 8:40 p.m. ET, landed safely at JFK at 9:09 p.m. ET, and taxied to the gate. There were 101 passengers and 8 crew members on the Airbus A321 aircraft, and no injuries were reported. American is swapping flight 300 to a new aircraft, as our team reviews the incident and inspects the aircraft. We never want to disrupt our customers' travel plans and we are sorry for the inconvenience."

The Port Authority says the flight may have been slightly off center during takeoff.

Passengers were re-booked and offered a room to spend the night.

Thursday morning, the rescheduled American Airlines flight 300 took off without incident to Los Angeles. More than 12 hours after the scare, the passengers and crew members on board landed safely at LAX.