Several taken into custody during Donald Trump protest in Anaheim 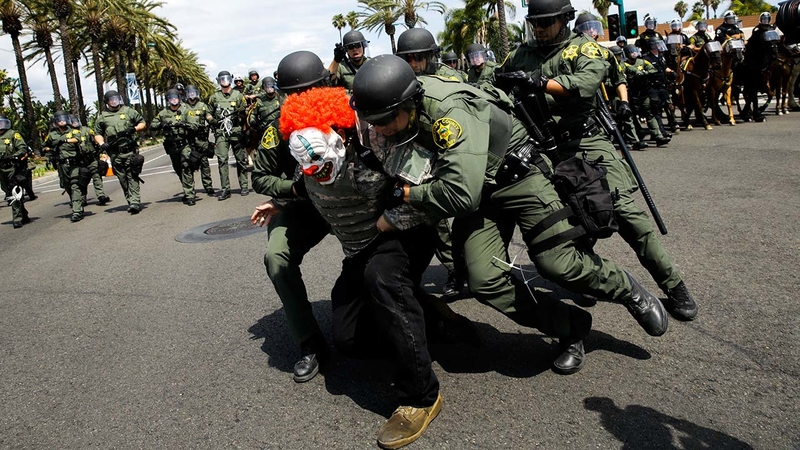 Several taken into custody during Donald Trump protest in Anaheim

ANAHEIM, Calif. (KABC) -- Several protesters were taken into custody as tensions flared outside a rally held for presumptive Republican nominee Donald Trump in Anaheim on Wednesday.

The melee outside the Anaheim Convention Center follows one day after violent protests erupted at his New Mexico rally.

Anaheim police had a heavy presence outside the rally Wednesday afternoon in hopes of preventing a repeat of raucous demonstrations at other Trump events.

The protesters, though small in numbers in comparison to past demonstrations, were very vocal, with one group even pummeling a Trump pinata. Law enforcement officers tried to disperse the crowd after the rally was over, calling the gathering an "unlawful assembly."

Some demonstrators with faces covered by bandannas shouted expletives against the Republican presidential candidate, while others stood quietly with signs reading "migration is beautiful" and "we are not rapists."

"People can get their message across anyway they want. It's when they start telling people to act aggressively or to engage in violence, then it becomes an issue," Sgt. Daron Wyatt with the Anaheim Police Department said.

Law enforcement officials were not informed of any plans for large-scale protests but boosted staffing for Trump's noon rally at the 7,500-seat arena as a precaution, Anaheim police said.

Several protesters were detained by authorities. According to Anaheim police, eight people, including seven adults and one juvenile, were arrested.

In April, 20 people were arrested outside of a Donald Trump rally in Costa Mesa, where protesters damaged cars and threw bottles.

Two days earlier, supporters and opponents of Trump clashed outside Anaheim's city hall as elected officials discussed a proposed anti-Trump resolution. Police said five people were pepper-sprayed by a demonstrator during that confrontation.

Following his rally, Trump was scheduled to appear for a taping of the "Jimmy Kimmel Live!" show as well as attending a fundraiser at the Brentwood home of real estate investor Thomas Barrack Jr.

Democratic presidential hopefuls Hillary Clinton and Bernie Sanders were also making stops in Orange County this week as California gears up for its June 7 primary.