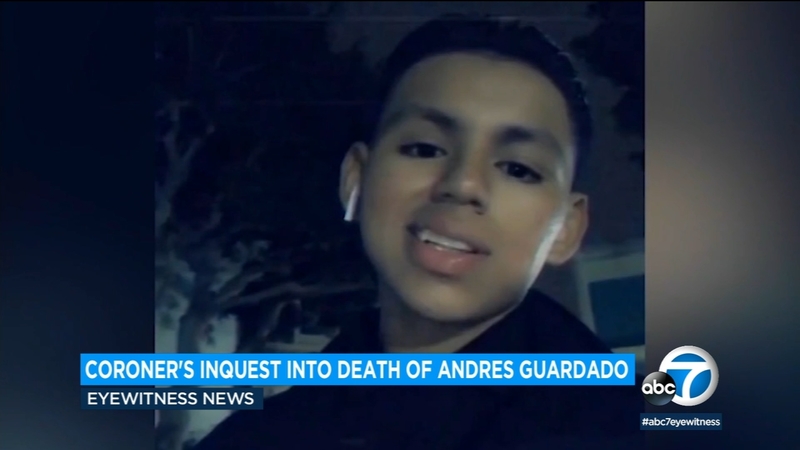 LOS ANGELES (KABC) -- The Los Angeles County coroner's office has started an inquest into the fatal shooting of 18-year-old Andres Guardado in Gardena by a sheriff's deputy.

The public proceeding is the first of this type in nearly 30 years. The coroner's office is questioning witnesses and showing documents of the autopsy.

Guardado was shot on June 18 in an incident involving Los Angeles County sheriff's deputies. An autopsy later found that he was shot five times in the back.

The results of an independent autopsy on Andres Guardado, an 18-year-old who was fatally shot by sheriff's deputies in Gardena, were revealed on Wednesday.

Circumstances of the incident remain under dispute as deputies reported that Guardado was reaching for a gun when he was shot. Guardado's family has disputed their claims and has filed a lawsuit against the Los Angeles County Sheriff's Department.

"This inquest is designed to ensure the transparent and independent review of all the evidence," said the Honorable Candace Cooper, the retired judge who is presiding over the inquest.

The family says Guardado was acting as a security guard at an auto body shop in Gardena.

At Monday's hearing a video was played of the sheriff's department talking about that at a news conference.

"Mr. Guardado was not wearing a security uniform clothing nor wearing any type of gun belt. He was not yet 21 years old, therefore he was unable to be legally employed as an armed security guard," said the LASD official.

The shooting back in June triggered protests and calls for charges to be filed against the deputy.

There was controversy as the coroner released the autopsy report even as the sheriff had placed a security hold on the information.

At Monday's hearing sheriff's investigators declined to answer questions regarding the investigation.

"On the advice of my counsel I'm choosing to exercise my constitutional right under the state and federal constitutions in response to any questions," said Det. Mike Davis.

The deputy who did the shooting is out of town and was not available for Monday's hearing.