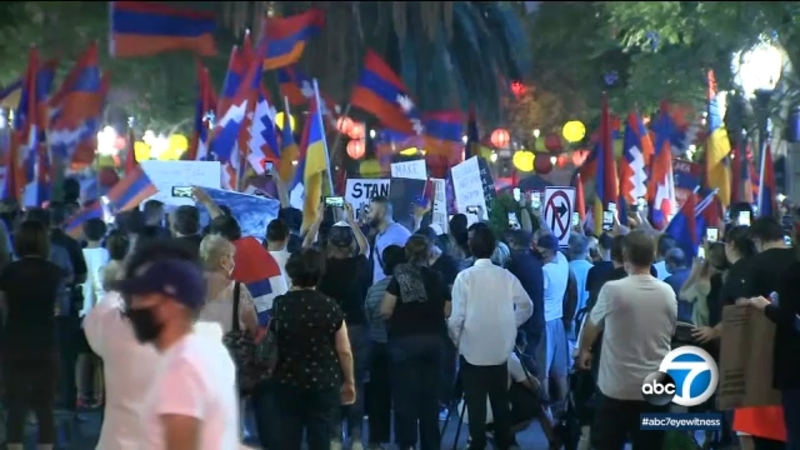 LOS ANGELES (KABC) -- Mayor Eric Garcetti and other Southern California leaders on Monday stood in solidarity with Armenia amid its ongoing conflict with Azerbaijan.

The mayor, along with Rep. Adam Schiff and others spoke as the local Armenian-American community stages protests in Los Angeles calling for more world attention to the conflict.

"They only path to sustainable resolution is through de-escalation and through return to negotiation between the parties on the ground," Garcetti said.

In recent days, protests have filled the streets of Hollywood and blocked the 101 and 170 freeways at times. Protesters accuse Azerbaijan of aggression against their homeland, happening even as the United States is distracted by the coronavirus pandemic.

Azerbaijan, however, faults Armenia in the conflict, saying its forces are shelling towns.

Elected leaders from the local, state and federal level joined the call to condemn Azerbaijan, as well as Turkey, a NATO ally that is supplying weapons and soldiers to the Azerbaijan side.

"It is time for the administration to get off the fence and to confront Turkey, (President Recep Tayyip Erdoan) and (Azerbaijan President Ilham Aliyev) and hold them responsible," Schiff said.

Narek Petrosyan, a 16-year-old Southern California resident of Armenian descent, said he wants to do what he can to help his people. He says it is unbelievable that some would call the smaller nation the aggressor in the conflict.