A group of pro-Armenia protesters continued to block Hollywood Boulevard at Highland Avenue into the morning commute Monday.
KABC 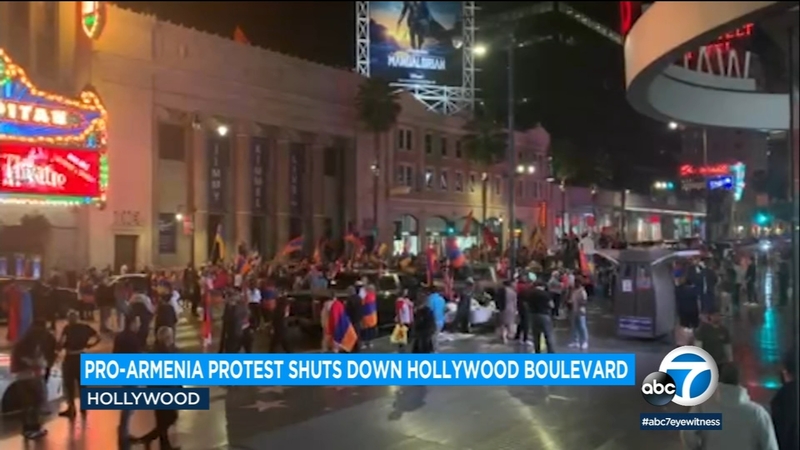 The protest in Hollywood began Sunday night, stretching into the next day amid calls to raise awareness and draw support for Armenia amid its military conflict with Azerbaijan over the disputed border region of Nagorno-Karabakh.

Recent cease-fire agreements have collapsed, with both sides accusing the other of breaking the truce.

Even as fighting continues over the separatist Nagorno-Karabakh region Armenia and Azerbaijan announced that a third attempt at a cease-fire would begin Monday.

AIR7 HD was over the scene Monday morning as dozens of cars and people packed the street near El Capitan Theatre.

Thousands of pro-Armenian demonstrators marched from the Fairfax District to Beverly Hills last month. Members of the Armenian community rallied outside the Turkish consulate on Wilshire Boulevard in Beverly Hills.

The demonstrations appeared to be largely peaceful. The massive crowd was estimated to be about nearly 20,000.

Thousands of pro-Armenian demonstrators marched from the Fairfax District to Beverly Hills on Sunday as a cease-fire between Armenia and Azerbaijan appeared fragile.