Armenian genocide anniversary: Many focus on healing, but acknowledgment remains at forefront

The Southland is home to the largest Armenian community outside of Armenia.
KABC
By Leanne Suter 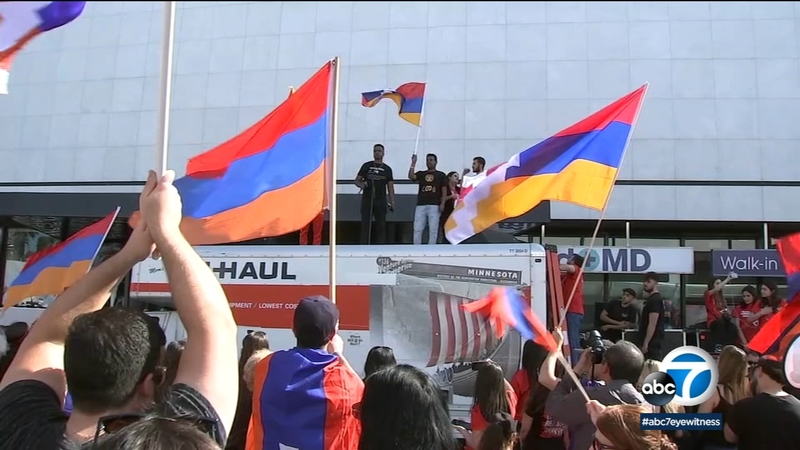 GLENDALE, Calif. (KABC) -- As many gathered outside the Turkish Consulate in Beverly Hills Sunday calling on the Turkish government to acknowledge the mass killing of Armenians during World War I, many also focused on healing.

Concerts, gatherings, and remembrance ceremonies highlighted the somber 107th anniversary of the beginning of the Armenian Genocide.

But how does one move forward with purpose?

The Southland is home to the largest Armenian community outside of Armenia, and officials said it must start with acknowledgement of what transpired.

"We ask the government of Turkey to acknowledge the atrocities," said Glendale Councilman Vrej Agajanian. "We want them to acknowledge what happened, that's why we continue until Turkey accepts the genocide."

President Joe Biden commemorated the anniversary Sunday, issuing a statement in memory of the 1.5 million Armenians "who were deported, massacred or marched to their deaths in a campaign of extermination" by Ottoman Empire forces.

Armenian Americans will gather at several events throughout L.A. County Sunday to mark the 107th anniversary of the beginning of the Armenian Genocide.

Biden's statement didn't reference the Russian invasion of Ukraine, which Biden has called a genocide. Yet Biden used the anniversary to lay down a set of principles for foreign policy as the United States and its allies arm Ukrainians and impose sanctions on Russia.

"We renew our pledge to remain vigilant against the corrosive influence of hate in all its forms," the president said. "We recommit ourselves to speaking out and stopping atrocities that leave lasting scars on the world."

The Biden statement notes that this event on April 24 marked the beginning of the genocide.

Past White Houses had avoided that word for decades out of a concern that Turkey - a NATO member - could be offended.

Turkey's government was angered by Biden's declaration on Sunday, just as it was last year.

"Statements that are incompatible with historical facts and international law regarding the events of 1915 are not valid," the Foreign Ministry said in a statement.

Turkey acknowledges that many died in that era, but it says that the death toll is inflated, that the deaths resulted from civil unrest and that Muslim Turks were also killed.

Separately, Foreign Minister Mevlut Cavusoglu on Twitter accused some Western leaders of "hypocrisy" for arguing in relation to Russia's actions in Ukraine that the term "genocide" can only be determined by court decisions.

While Biden has said it would be up to lawyers to decide if Russia's conduct met the international standard of genocide, Biden has not been shy about condemning Russian President Vladimir Putin for pursuing genocide.

"It sure seems that way to me," Biden said earlier this month.

Meanwhile, the Armenian community said marking a moment of history they say should never be forgotten is a step forward, and making sure it never happens again.

"If you deny a genocide, or if you're ignoring someone who denies it, or you're still friends with them, you're participating in the genocide," said Sako Asatryan of Porter Ranch.