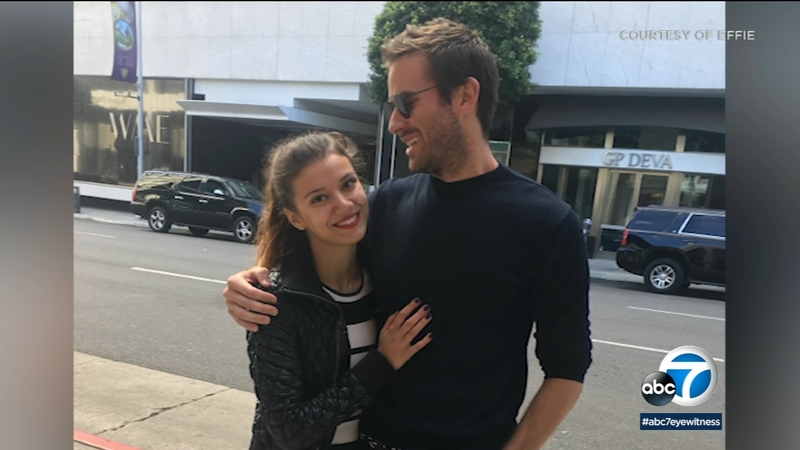 LOS ANGELES (KABC) -- A woman who says she was in a relationship with Armie Hammer came forward Thursday with brutal allegations of rape and other physical and mental abuse by the actor.

The woman, who identified herself as Effie and released a photograph of herself with Hammer, said she met the actor in 2016 when she was 20 years old and they became involved in an on-and-off relationship until 2020.

She alleges that during the course of the relationship, Hammer engaged in mental, emotional and sexual abuse.

In a statement released through her attorney, Gloria Allred, Effie alleged:

"On April 24th, 2017, Armie Hammer violently raped me for over four hours in Los Angeles, during which he repeatedly slammed my head against a wall, bruising my face. He also committed other acts of violence against me to which I did not consent. For example, he beat my feet with a crop so they would hurt with every step I took for the next week. During those four hours, I tried to get away but he wouldn't let me. I thought that he was going to kill me. He then left with no concern for my well-being."

Hammer, 34, was married since 2010 and separated from his wife in 2020. In recent months he has faced a series of allegations from multiple women about physical, emotional and sexual abuse, including bizarre allegations that he indulged in cannibalistic fantasies.

When asked about the case, the Los Angeles Police Department issued a statement confirming an investigation is underway, although it did not specifically refer to Hammer by name.

Effie, who is now 24, lives in Europe, Allred said. The new statements were released in response to comments from Hammer's attorneys that "All of his sexual activities outside of marriage were completely consensual in that they were fully discussed, agreed upon and mutually participatory."

Allred said: "It is important to emphasize that even if a sexual partner agrees to certain sexual activity, she still has a right at any point to withdraw her consent. If she does withdraw her consent and asks her partner to stop for any reason, he is legally and morally obligated to stop. If he does not stop, he is then at risk of committing a crime against her.

Hammer's attorneys put out a new statement on Thursday in response, including the release of a graphic text message exchange between the two.

(In their statement, they identified Effie by her last name, but ABC7 is withholding that name to respect the alleged rape victim who is only identifying herself by her first name).

"(Effie's) own correspondence with Mr. Hammer undermines and refutes her outrageous allegations. As recently as July 18, 2020, (Effie) sent graphic texts to Mr. Hammer telling him what she wanted him to do to her. Mr. Hammer responded making it clear that he did not want to maintain that type of relationship with her. The screenshot below is just one of hundreds (Effie) sent to Mr. Hammer.

"It was never Mr. Hammer's intention to embarrass or expose (Effie's) fetishes or kinky sexual desires, but she has now escalated this matter to another level by hiring a civil lawyer to host a public press conference. With the truth on his side, Mr. Hammer welcomes the opportunity to set the record straight.