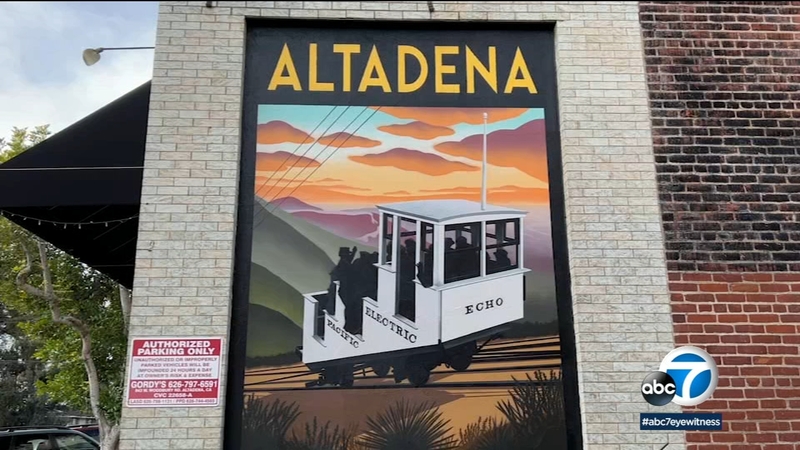 PASADENA, Calif. (KABC) -- A former graffiti artist has turned his skill and passion into a viable career, allowing him to support his growing family.

Victor Ving and his wife Lisa started the Greetings Tour in 2015 out of their RV. As they traveled the nation, they created postcard mural landmarks, meant to be photo opportunities for tourists passing through various cities. They consider the murals to be modern day postcards, popular for their fans on social media, including Instagram

They've done more than 50 murals in 25 states. Their goal is to have a mural in every state. Current murals can be found in Las Vegas, Orlando, Chicago, Knoxville, New Orleans, San Diego, Tucson, Louisville, even Anchorage, Alaska and Oahu, Hawaii.

"I never went to formal art school," says Ving. "I guess I learned everything through graffiti and street art growing up as a teenager in New York."

After six years, they've settled in Pasadena - so it's only fitting that Victor and Lisa finally did work in their new hometown.

In 2021, they completed murals on the side of Pasadena's Highlight Coffee on Lincoln Avenue and at Altadena Hardware.

They're currently working on plans for a new mural on Altadena's Grocery Outlet building on Lake Avenue. Funds have been raised for the supplies, while the mural itself will be donated.

"We've been working with the community with what to incorporate inside the lettering," says Ving.

Victor says he wants to give back to his community by offering education opportunities with children, along with the simple gift of making people feel good.

"When people see their own city's name, they feel a sense of pride."

Ving wants to be an inspiration for other local artists who think public art options aren't available or accepted. He's proof you can do it and succeed.

"You don't have to follow these certain career paths, you can make your own thing happen, that's kinda what we did," says Ving. "We made this up on our own, took a chance... our plan was to do it for one year and here we are 6 years later."