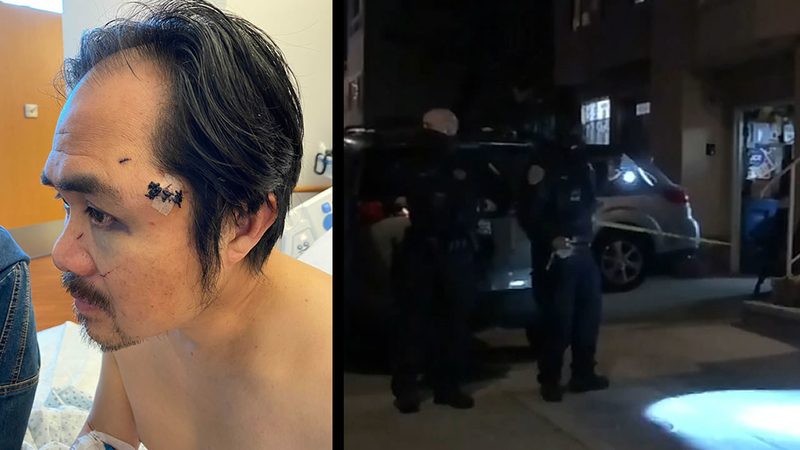 SAN FRANCISCO -- An Asian man is talking about his horrifying experience of getting stabbed multiple times while walking home from work in San Francisco's Bayview over the weekend. His attack was just one of several in a 48-hour period.

From his hospital bed, 53-year-old Chiling Lee shows his deep, red wounds after he was stabbed five times around 10:30 p.m. Saturday.

"Once in the head, two in the tummy..." describes his wife Dong, who points to his bruised hand.

Chiling went on to explain in Mandarin how he was stabbed in the chest and has a puncture in his lungs, along with a broken rib.

"I didn't pay attention (while walking)...The guy came and attacked me," he said.

Dong explains how both her husband and son tried to fight off the attacker, who still managed to escape with Chiling's backpack.

"My son tried to chase the guy, so I'm so worried he had a knife and may have a gun" says Dong. Chiling points to his broken phone and explains how he used one hand to grab the man's hair, while he used his iPhone to hit the suspect's eyes and nose.

While Chiling deals with physical and emotional trauma, others who live in the Bayview feel under attack as well. Just one day after Chiling's stabbing, two Asian women, ages 61 and 71, were attacked and robbed in the area of Bacon and Holyoke and Somerset. One incident was at gunpoint.

At a virtual press conference, the San Francisco Police Department addressed a 70% increase assaults with firearms citywide in 2020, compared to the year before.

A number of concerned residents also spoke out, expressing frustration over not feeling safe just walking around, including one who recounted the terror of getting mugged.

Despite police explaining the increased police presence in the area, it's not enough for the Lee family to stay long term. Dion Lim, anchor with ABC7's sister station ABC7 News, asked if they wanted to move out of the Bayview and Dong responded that it was a possibility, but they were concerned about rent.

The Lee family hopes to one day first save up enough money to buy a car so they won't have to take the bus and walk home from the bus stop any longer.

The family set up up a GoFundMe to pay for their medical insurance deductible of $6,500, and potential lost wages during Chiling's recovery.