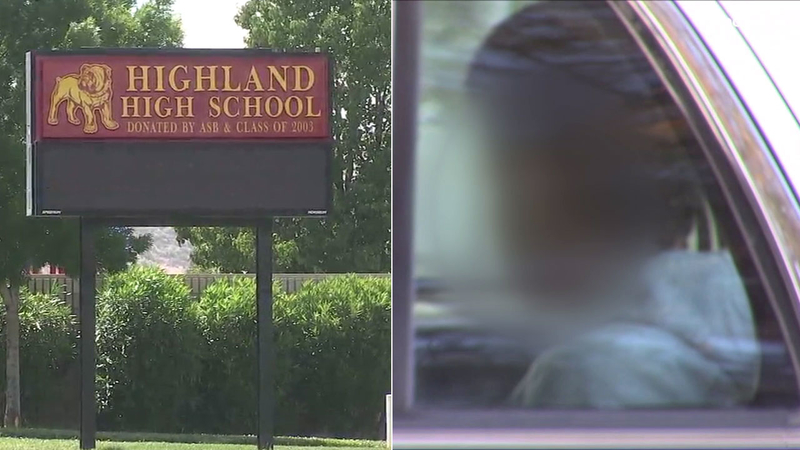 Teen detained in shooting that injured 1 at Palmdale school

PALMDALE, Calif. (KABC) -- A 15-year-old boy was wounded and a teen suspect was detained Friday morning in a shooting at Highland High School in Palmdale.

The Los Angeles County Sheriff's Department confirmed that one gunshot victim was hospitalized after the incident. Authorities said the victim is a 15-year-old boy who was shot in the arm/shoulder area and was transported by a good Samaritan to a local medical center. Sheriff's officials said the boy was in stable condition.

Student Pauline Guijaro said she heard a volley of "around 10 gunshots. It's really hard to wrap our head around this."

Douglas Alexander, a teacher, described the aftermath of the initial gunfire.

"A bunch of kids started running out to me, towards me, with very panicked looks on their faces," Alexander said. "They basically said, 'Mr. Alexander, turn around, turn around, there's an active shooter.'

"And I didn't really have time to react to that because almost immediately after that I heard one single gunshot -- very loud and very close by," he added.

According to investigators, the Palmdale station received about 100 calls about a possible person with a gun at the school shortly after 7 a.m. A swarm of deputies and California Highway Patrol officers arrived at the scene within five minutes and established a perimeter in the area. McDonnell said the suspect had left the campus within the minutes before deputies arrived to the school.

LASD Sheriff Jim McDonnell speaks at a press conference following a school shooting in Palmdale on Friday, May 11, 2018.

The suspect's identity was not immediately released, but authorities confirmed he is a 14-year-old former student who had transferred schools within the last month. The boy was detained at a Von's supermarket about a quarter of a mile from the school. One firearm, which authorities said was a SKS 7.62 round, was recovered in the desert after an extensive search by sheriff's deputies.

LASD Sheriff Jim McDonnell said the boy was detained after the juvenile suspect's parents phoned an off-duty LAPD officer, considered a friend of the family, and notified the officer that the suspect was at the Von's store.

At about 7:40 a.m., the father of the suspect called the off-duty LAPD officer after his son told him he shot his gun in the air and was headed toward Von's. Earlier that morning, the suspect's mother also called the officer, saying they were having trouble with her son and that he had ran away from home.

The LAPD officer was able to locate the teen boy at the supermarket and called authorities to the scene. The boy was detained on one count of attempted murder, McDonnell said.

Investigators were looking into the possibility that the victim was perhaps not targeted but may have been hit by shots that were randomly fired by the suspect.

Authorities were continuing to investigate a motive and how the teen got hold of a firearm.

The campus, at 39055 25th St. West, was initially placed on lockdown along with all other schools in the Antelope Valley Union High School District. Just after 9 a.m., Los Angeles County sheriff's deputies confirmed that Highland High School had been cleared; the lockdown was lifted about 90 minutes later.

Law enforcement officials said earlier reports of a possible shooting at Manzanita Elementary School, which is about 7 miles away, were called in but turned out to be false. Authorities were investigating why there were calls at that campus and whether it was a possible diversion to draw deputies away from the high school.

"There was no threat to that campus whatsoever," a sheriff's official said in a press conference.

"This is ridiculous -- there's too many school shootings," said parent Tracy Reed, whose son texted her about the shooting at his school. "I mean, it's tiresome. We're not supposed to be like this -- we're the United States. Our kids aren't supposed to be hurt."

Authorities set up an area to receive worried parents who were rushing to the school to pick up their children.

"Please go to Avenue P-12, and deputies will let parents through individually," Highland High School's principal said on social media. "This may take a while, so your patience is appreciated."

Students and parents react to the shooting at Highland High School in Palmdale on Thursday.

Venessa Revis' daughter said she and other classmates just stayed close during the chaos, looking to protect each other if the worst happened.

"I started crying. The ones who ran in said there were gunshots going off," said student Pualani Revis.

California State PTA President Dianna MacDonald released a statement on the incident, saying it is the 21st school shooting in the U.S. in 2018 alone.

The statement read in part: "Now is the time for change. Gun violence is a public-health crisis that affects all of us - but most of all, our youth. It is clear why we must pass sensible federal gun legislation which includes background checks, raising the age requirement for purchase, banning assault weapons for civilians that should only be used for military or law enforcement use and increase support services for mental health."
Report a correction or typo
Related topics:
palmdalelos angeles countyschool shootinghigh schoollos angeles county sheriff's departmentgun violenceteen shot
Copyright © 2021 KABC-TV. All Rights Reserved.
More Videos
From CNN Newsource affiliates
TOP STORIES