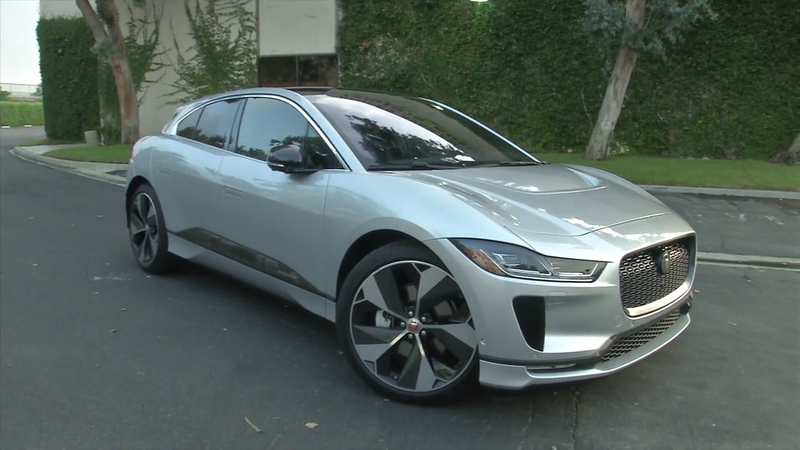 Jaguar is rolling right along with the tastes of its buyers.

First, there was the F-PACE sport utility vehicle, which almost instantly became the best-selling Jaguar in the U.S. Now, you can get its trimmer sibling the E-PACE. Luxury customers are flocking to reasonably sized SUVs these days.

And some luxury customers want to go electric, so this is Jaguar's latest SUV model - I-PACE. It's a fully battery powered car, but the way Jaguar insisted on doing one.

"It has the integrity of being a Jaguar, without any influence from elsewhere," said Ian Callum, Jaguar's design director, commenting on the company launching its first EV model.

The specs are impressive. Nearly 400 horsepower and an estimated driving range of 240 miles. Recharge time for a fully depleted battery at Level II (240 volts) is over 12 hours, however.

The I-PACE does accept Level III DC quick charging (480 volts), available at a limited number of public locations. In that circumstance, the battery can be charged up to about 80% capacity in as little as 40 minutes.

On the practical side, there's plenty of room for people and cargo, including in a small front-mounted trunk. And of course, like most electric vehicles, it's very quiet on the road. The base price for the S model is $69,500 (before any rebates or incentives), and higher trim levels can send the price up to or over $90,000.

Jaguar wanted to make sure the I-PACE had a huge dose of style, specifically Jaguar style. The side profile gives a look of athleticism and optional 22-inch wheels drive the performance point home.

As the man who led styling for the vehicle, Callum said his team of designers was given a specific list of points to hit.

"You've got to get beauty into it, simplicity, drama, excitement, and just exaggeration. And so we set about to design a car that looks like a Jag," he said.
The I-PACE is the beginning of what will be a small onslaught of high-range, high-power plug-in cars from premium European brands. Audi, Porsche and Mercedes-Benz will be right behind with new EVs in the coming months and years.

As for Jaguar, this isn't technically its first EV.

If you follow motorsports, you may have seen the all-electric Formula E open-wheel racing series. Jaguar's been a part of it for some time.

And you may not have known it, but that stunning vintage blue E-type roadster that Royals Harry and Meghan drove on their wedding day (and seen around the world) is pure electric, converted at the Jaguar factory.

The British brand is serious about a future that includes electric cars. And perhaps the company's innovative founder, the late Sir William Lyons, would like what he sees.