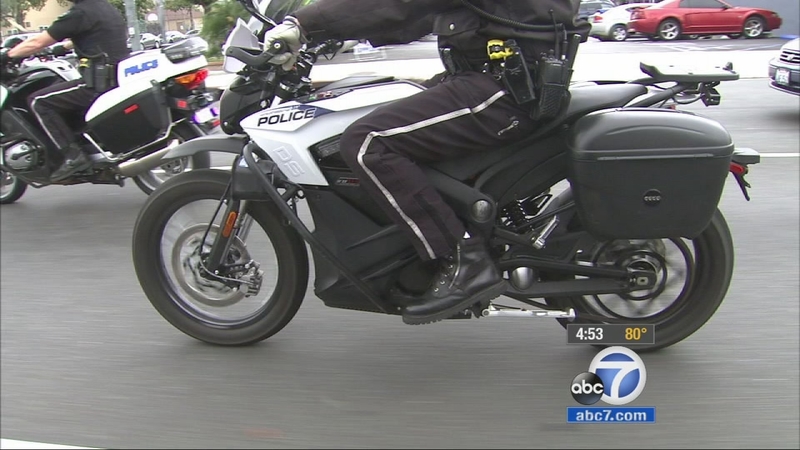 BURBANK, Calif. (KABC) -- Burbank police have added a new electric motorcycle to its patrol fleet. Not only does the Zero motorcycle look different, it sounds different.

"Our Burbank Water and Power had some grant money, some funds for alternate-fuel vehicles," Burbank Police Sgt. Kerry Schilf said. "We were able to fortunately purchase two motorcycles through a grant, and now we're in a one-year pilot program and we're testing them."

The Zeros sit alongside Burbank's usual BMW patrol bikes and are charged overnight to be ready for duty. So far, they're a good fit for the city's 18 square miles. Electric range varies, but could be anywhere from 100 to 200 miles.

The department's two Zero DS models are identical to the ones available to the public at a suggested retail price starting at about $12,000 . The DS stands for "dual sport," which means they're also off-road capable for patrolling the city's hills.

They've also turned out to be a conversation starter with members of the public.

"When people see us on it, they don't know what to think," said Officer Ryan Murphy, one of the department's motorcycle officers who is using the new electric bikes. "The thing that's neat about it is that we've gotten a lot of positive feedback with the bike, so that's always a good thing."

The Zero DS models that Burbank police have are just like the ones available to the public. The department had to modify them for police use with lights and sirens, but they didn't want to add too much equipment in order to keep them lightweight. They weigh just more than half of what the big BMW's do, and the idea is to keep them that way for both efficiency and performance.

The Zero can get moving much more quickly than a regular motorcycle because there's no engine to start or clutch to engage. Once the key is on, they can accelerate instantly from a standstill

So far, about halfway through a one-year evaluation, the electric cop bikes are coming through with flying colors.

"It's just a hoot to ride. It's very economical, and it leaves less of a carbon footprint, which is just outstanding," noted Sgt. Schilf.