Parents hunting for formula online should research who they're buying from to make sure the seller is legitimate, experts say.
ABCNews
By Kaitlyn Folmer and Sasha Pezenik 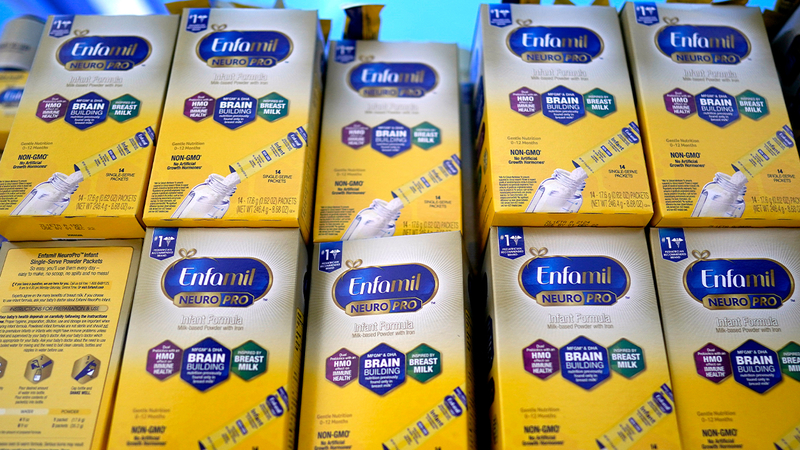 FTC warns about baby formula scams on the rise

WASHINGTON -- The dire shortage of baby formula has forced frustrated parents to scour social media for enough supplies to feed their children --- their desperation now becoming a target for scammers seeking to exploit that distress.

An urgent new warning from the Federal Trade Commission is sounding the alarm that thieves have begun to swarm the shortage for their own illicit profit, "popping up online and tricking desperate parents and caregivers into paying steep prices for formula that never arrives."

"Scammers exploiting the high demand for baby formula have sunk to new lows," the bulletin says, warning that schemes may make fake websites or profiles on social media using product images and logos of household-name formula brands, "all to make you think you're buying products from the companies' official websites," the FTC said.

President Biden has invoked the Defense Production Act to speed production of baby formula and has authorized flights to import supply from overseas.

The government agency's alert marks the latest in a rapidly growing groundswell of similar cautions: seven states around the country are now advising parents to stay vigilant amid the formula frenzy.

"Parents of infants in North Carolina are struggling to feed their babies during the current baby formula shortage. But instead of helping parents in this perilous position, scammers are looking to take advantage of this crisis to steal a quick buck," North Carolina Attorney General Josh Stein's office said Wednesday.

"Parents, feeling the pressures of the shortage, may find themselves scrambling to find alternative solutions but in the end could end up being scammed by unscrupulous bad actors online," New York Secretary of State Robert J. Rodriguez said in a recent alert. "It is imperative that parents and guardians be aware of scams and know how to spot illegitimate online sales."
"Anyone seeking to take advantage of this crisis in a manner that violates the law will be held accountable," New Hampshire Attorney General John M. Formella said in an alert Wednesday, cautioning against buying formula from "untrusted or unfamiliar online sources," and that families should "thoroughly research any online retailers that claim to be offering formula for sale via the Better Business Bureau."

The Better Business Bureau told ABC News it has already been fielding complaints from parents who say they have been the victim of formula scams online -- and issued their own alert earlier this month.

"Someone is claiming to sell that product and they are asking people to pay using a PayPal or Venmo or a cash app-type of system. And once that money is paid out, and the order is placed, they never end up receiving that product," Sandra Guile, a BBB spokesperson, said.

First-time mom Jessie Esparza-Wohlgemuth had scoured every store and social media group she could think of trying to find baby formula for her 6-month-old son, Elijah Matthew.

The shortage has made those precious cans hard to come by. Parents nationwide are confronted by barren grocery shelves and limits on how much they can buy at one time. Esparza-Wohlgemuth was starting to reach her wits' end.

So when one person reached out online in late April offering what seemed like a great deal, she got excited -- nearly two dozen cans of Nutramigen for a decent price -- enough for Elijah and more to redistribute to other moms in the community. The would-be seller even sent along pictures of the available products.

Esparza-Wohlgemuth sent payment of nearly $300 and offered to send the seller a prepaid shipment label.

Then, the seller stopped responding to her messages, and those coveted cans never showed up.

"I realized, yeah, I just got scammed," Esparza-Wohlgemuth told ABC News. "That moment when you feel like there's a relief -- and then you realize that you just got taken advantage of -- that's really hard. That's $290 I could have spent on my own child, for diapers, wipes, clothes. It's heartbreaking someone would do this to a little person and take advantage of the moms that are literally scrambling to find food for their babies."

The White House says it will crack down on price gouging and take steps to import more baby formula.

For enterprising fraudsters, families' frenzy to feed their children amid the shortage has presented a ripe opportunity.

Tennessee mom Kate Fazio says she was scammed earlier this year. The person she tried to buy from even sent her a fake tracking number.

"The link that she sent was for something that had been delivered to California. It wasn't baby formula. I never got my baby formula from her and she stopped responding to me pretty quickly after that," Fazio said.

Fazio reported the scam to her local authorities, PayPal and to her bank, but saw no progress for months. She said she has seen other moms calling out the same fake seller for similar scams as recently as last week.

On Wednesday -- after ABC News reached out to PayPal for comment -- Fazio said her money was reimbursed "as a one-time goodwill gesture," according to a message from the company to Fazio shared with ABC News.

ABC News reached out to PayPal, which confirmed it had refunded Fazio.

PayPal said its platform has a zero-tolerance policy for fraudulent activity and will shut down anyone attempting to defraud customers or who violate platform policies.

More than 30% of baby formula was out of stock in the U.S. since April, after a recall on numerous major brands.

Experts advise that consumers using cash payment apps such as PayPal or Venmo should use the "goods and services" function for their transactions, which offers additional purchase protection. If a seller doesn't deliver on what they've promised, the gipped buyer gets a refund.

Parents hunting for formula online should research who they're buying from to make sure the seller is legitimate, experts say -- even searching the company, person or product by typing their name with terms like "review," "complaint" or "scam."

Social media groups have offered a unique forum for families to crowdsource formula within their communities, but those groups have also offered easy marks for scammers to infiltrate. The Better Business Bureau says it may be a red flag if a seller advertising on social media is communicative until the payment is made, but once payment clears, they are unreachable.

A spokesperson for Meta, the parent company of Facebook, told ABC News the company does not tolerate scam activity on any of its platforms, and that it actively reviews and removes suspicious activity.

Experts suggest keeping receipts from all transactions, and, when possible, use a credit card for the purchase, since that could provide more protection against fraud than other payment methods.

"That someone took advantage of me in a time where I'm already vulnerable, fearing not having enough to feed my kid, that made me feel even more vulnerable," Fazio said. "As a mom, your number one goal is to take care of these kids. Keep them happy, keep them fed, keep them safe."

Members of the public seeking to report suspected online shopping fraud can file a complaint with the Better Business Bureau at BBB.org or report a scam at BBB.org/scamtracker.

Consumers can also file a complaint with the Federal Trade Commission (FTC) at reportfraud.ftc.gov or call 877-FTC-HELP (382-4357).