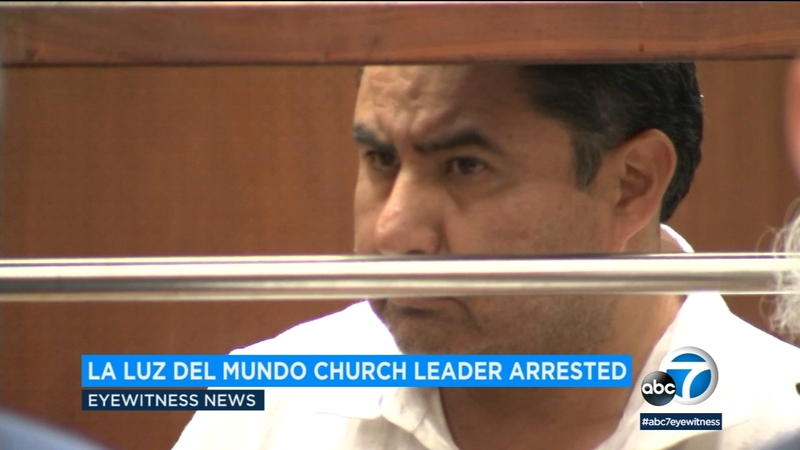 LOS ANGELES (KABC) -- Bail was set Wednesday at $50 million for Joaquin Garcia, the leader of the La Luz del Mundo church who is facing human trafficking and child-rape charges.

Becerra filed 26 charges against him, ranging from human trafficking and production of child pornography to rape of a minor.

Prosecutors asked for the high bail amount because they noted the church has plenty of money and international ties. They want to ensure Garcia does not flee the country.

To his followers, he is a man of God. Naason Joaquin Garcia claims that God ordained him to be the voice of the Gospel and lead an international flock through Light of the World Church.

"He speaks for God," said Ashley Valdez, a spokesman for the church. "He is the mouthpiece for God. He is the one who like the apostles were established by Jesus Christ to be where they are to direct the church of God."

To state prosecutors he is a child predator.

According to the complaint from the state attorney general, Garcia used his power to exploit minor girls, telling them and their parents that if they went against the apostle, they were acting against God.

He is accused of making the girls touch each other sexually, having pictures taken, and forcible rape.

Wednesday he and three co-defendants made their first appearance in court.

There are dozens of congregations in Southern California.

The 50-year-old is originally from Los Angeles and took over leadership of the church from his grandfather.

Its doctrine has spawned dissent. Some former members compare it to a cult. Parents are urged to disown their children for not believing.

Since Garcia and his co-defendants were arrested, the main church in East LA has opened its doors. Members are urged to pray here around the clock.

The church is part of an evangelical outreach with plans to build a 272-acre complex of offices, commercial businesses and learning centers in Georgia.

Members are being told not to doubt Garcia's dignity and that the felony allegations against him and his associates are "the Devil's work."

The state attorney general is expected to make a public appeal for more alleged victims to come forward.