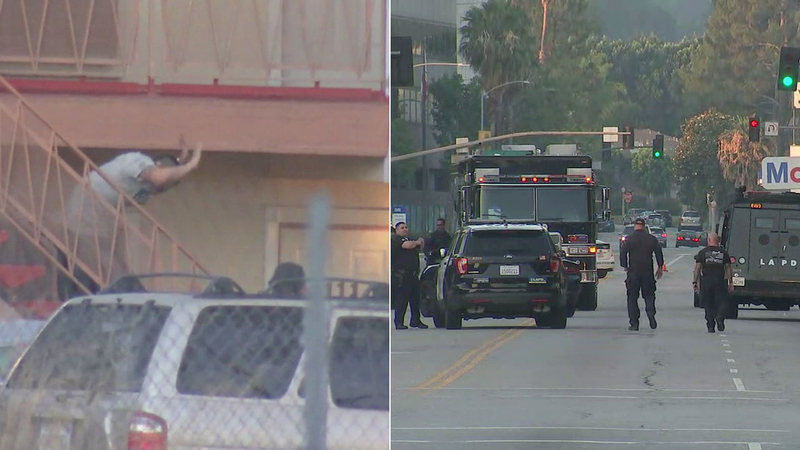 The standoff took place at the 777 Motor Inn, located in the 4700 block of the boulevard. Guests inside were evacuated.

The situation unfolded about 11:30 p.m Tuesday, when officers received a call about a man and woman who were robbed of money, cellphones and prescription medication while returning to their motel room, police said.

The suspect was believed to also be a motel guest in a room adjacent to the victims, where he retreated and refused to communicate with responding officers, authorities said.

The unidentified suspect was armed with a gun, police said. Los Angeles Police Department SWAT officers attempted to make contact with the robbery suspect at about 4 a.m., asking him to answer a phone.

Authorities then deployed several rounds of tear gas inside the room as an attempt to get the suspect to communicate and surrender.

At about 5:30 a.m., the suspect was seen slowly walking out of the motel room while partly covering his head and then putting his arms up. He was taken into custody without incident.

#BREAKING now on @ABC7: Standoff over. Watch what just unfolded LIVE, as an armed robbery suspect surrendered to #SWAT at a Sherman Oaks motel where @abc7marccr is reporting. #standofF #surrender #ShermanOaks pic.twitter.com/HkGU9SOZHC

No injuries were reported in the incident.

Hours earlier, two friends of the suspect, who were also staying at the motel, were initially detained and released. Authorities said they played no role in the robbery.