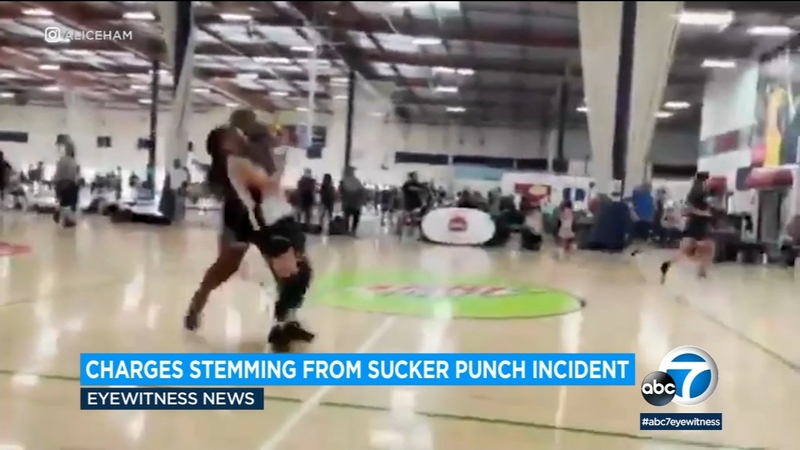 GARDEN GROVE, Calif. (KABC) -- A 44-year-old mother has been charged with multiple counts after allegedly instructing her daughter to hit a fellow basketball player during a youth basketball game in Garden Grove, prosecutors announced Thursday.

Latira Shonty Hunt is facing one count of contributing to the delinquency of a minor and one count of battery, both misdemeanors, according to the Orange County District Attorney's Office.

Hunt was in the stands at the MAPS sports facility in Garden Grove on Nov. 7, watching her teenage daughter compete in the game.

The mother is accused of yelling "you better hit her for that" to her daughter after she had interaction with a rival player on the court, the DA's office said in a news release.

The daughter then sucker-punched an opponent on the court and the victim immediately fell to floor, suffering a concussion. The incident was captured on a video that went viral.

"It is unconscionable that a parent would encourage her child to engage in violence during a sporting event," District Attorney Todd Spitzer said in a statement. "Youth sports are invaluable in teaching our children discipline, teamwork, and sportsmanship. But a win at all costs mentality that is completely devoid of fair play, respect, and civility is disgusting."

An Orange County mom has filed a police complaint after her daughter was left with a concussion from a sucker punch during a youth basketball game.

Hunt faces a maximum sentence of one year in jail if convicted on all counts, prosecutors said.

Corey Benjamin, the assailant's father, later apologized to the victim and said he was "shocked and disappointed at my daughter's behavior."

Benjamin, a SoCal native, played on the Chicago Bulls from 1998 to 2001 and had a short stint with the Atlanta Hawks. He also played on international teams in Europe and Asia.

"This is not how I raised my daughter," a statement from Benjamin said.

A former NBA player has issued an apology after his daughter was seen at a youth basketball game in Orange County throwing a vicious sucker punch that left another girl with a concussion.

"To the young lady who was punched by my daughter during a youth basketball game, I sincerely apologize to you and I am praying for your complete healing both physically and emotionally. To her family, I deeply apologize and regret that this happened to your daughter as she did not deserve this to happen to her. Finally, I apologize to all of those who have been impacted and hurt by the actions of my daughter as well as those of her mother. I am here for your family and wish only the best for you. As a father, I'm shocked and disappointed at my daughter's behavior as this is not a reflection of the values and standards that my family holds. Nor does it exemplify the values, character and spirit of sportsmanship that the game of basketball requires. My daughter made a mistake. One that she will need to make right. I am committed to getting my daughter any help she may need and support her in taking accountability for her conduct."