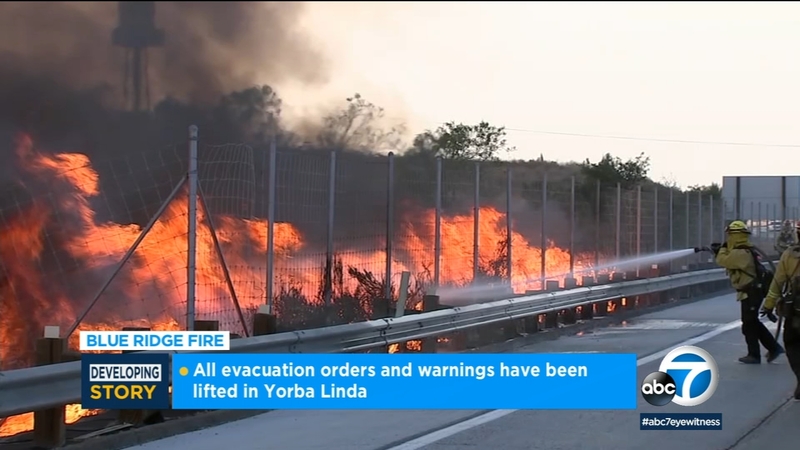 YORBA LINDA, Calif. (KABC) -- More than 1,000 firefighters on Thursday continued to make progress against the Blue Ridge Fire, which was 30% contained after officials lifted evacuation orders that affected thousands of residents in Yorba Linda and Chino Hills.

In a statement, Cal Fire said the spread of the flames had slowed due to a decrease in winds and an uptick in humidity in the fire zone.

Crews planned to monitor the fire line throughout the morning, mopping up hot spots and focusing on perimeter control, the agency said.

High winds, which had grounded firefighting aircraft on Monday, were much less of a factor on Wednesday.
EMBED More News Videos

At least 10 homes have been damaged in the blaze, which erupted Monday afternoon near the Green River Golf Club and the 91 Freeway.

"The winds we've had today were very calm,'' said Firefighter Edwin Zuniga, a Cal Fire spokesman. "I haven't seen a big push. It's a light breeze, but nothing significant."

Full containment of the blaze is expected on Nov. 10, according to officials.

At an afternoon press conference, Operations Section Chief Tim Ernst said of the Blue Ridge and Silverado fire: "We don't anticipate either of the two fire perimeters from moving very much."

Ernst said fire officials who flew over the fires, whose combined acreage was about 28,000, saw only two incidents of smoke on Wednesday.

Traffic was being allowed on the 91 Freeway connectors to the Corona Freeway, a Caltrans spokesperson said. State Route 142 from Chino Hills Parkway to Portola Parkway reopened late Wednesday afternoon.

The estimation of burned acreage was lowered Tuesday night from about 15,200, according to Orange County Fire Authority spokesman Steve Concialdi.

The cause of the Blue Ridge Fire remains under investigation.