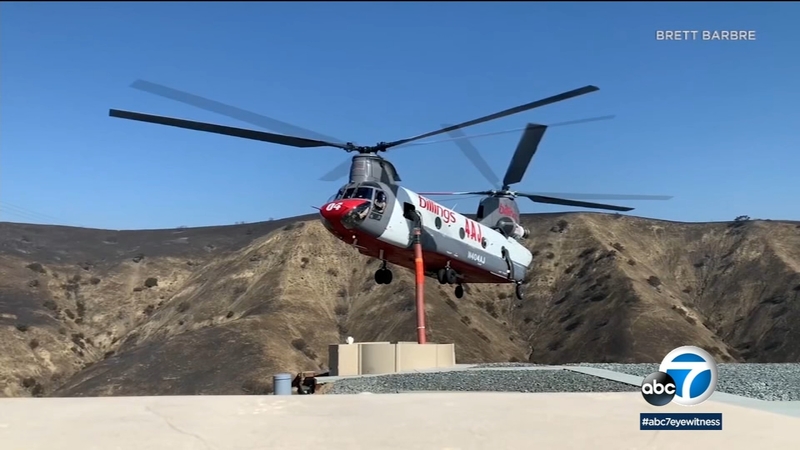 YORBA LINDA, Calif. (KABC) -- With the Santa Anas are moving in, red flag warnings are going up, and that means extreme fire danger.

Crews in Orange County have a new tool to help in the firefight: a type of fire hydrant for water-dropping helicopters.

With wildfire season a year-round threat in Southern California, firefighters need all the help they can get to keep up with the all too familiar wind-driven infernos.

In October, the Blue Ridge Fire damaged seven homes and destroyed another - but Orange County Fire Authority Capt. Greg Barta says it could have been much worse without the efficiency of this heli-hydrant.

"We were able to utilize this heli-hydrant to refill helicopters rapidly so they could continue making water drops which saved countless homes," Barta said.

The Yorba Linda Water District is behind the installment of a fill station sitting on the hills of east Yorba Linda since March, and another is on the way at the start of 2021 about 10 miles east.


Brett Barbre, the general manager for the Yorba Linda Water District, talks about the importance of the heli-hydrant,

"The fires will burn east to west and so we're kind of midrange for where the fires would burn through, so we want to be as far east as we can and so we have a reservoir location out east and it'll be located there. It'll be a little bit bigger, a little bit deeper and we expect it to get a lot of use," Barbre said.
The alternatives include drafting from lakes, which could mean particulates in a helicopter's pump system, or relying on fire engines to fill from hydrants, then giving the water to the aerial resource, which is a time consuming process.

The heli-hydrant has a 2,700 gallon capacity, much like a toilet it works with a valve, filling up as water leaves, ready for the next chopper in just 30 seconds.


Barbre says at the start of the Blue Ridge Fire, some contractors who didn't know about this water point were making their way over to Anaheim Hills, taking anywhere from eight to 10 minutes to fill up. But after they heard about this heli-hydrant, they cut their fill time in half

"It's much more efficient. It's quicker and that makes a difference between saving a home or letting a home burn," Barbre said.

The city of Laguna Beach also got its own heli-hydrant this year to help cover homes in south Orange County.