Two weeks after the Bobcat Fire erupted in the Angeles National Forest, the 103,000-acre blaze has left a path of destruction in the San Gabriel Mountains region.
KABC 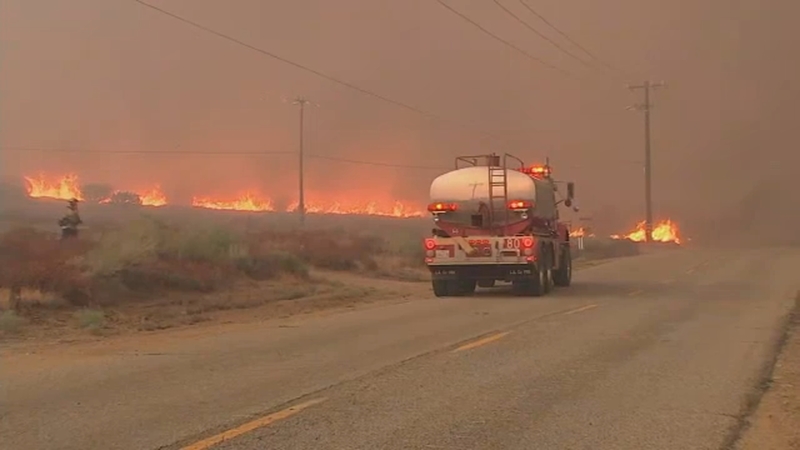 JUNIPER HILLS, Calif. (KABC) -- Two weeks after the Bobcat Fire erupted in the Angeles National Forest, the 103,000-acre blaze has left a path of destruction in the San Gabriel Mountains region, scorching multiple homes and threatening the Mount Wilson Observatory and nearby broadcast towers.

The blaze nearly doubled in size Friday, growing by more than 17,000 acres as 30-mph winds fanned flames. The raging inferno, which broke out on Sept. 6, continued its march across the San Gabriel Mountains and burned semi-rural properties in the community of Juniper Hills.

Firefighters protected homes and chased spot fires sparked by embers blown across neighborhoods by erratic gusts. Surrounding areas were under evacuation orders and residents of ranches scrambled to get horses and other animals out.

"We've got a very active firefight on the north end of this fire and we're bringing in more strike teams. We'll be in this firefight for some time," Los Angeles County Fire Captain David Dantic Friday evening. The blaze was also expanding on the eastern and western edges, officials said.

Containment of the blaze remains at 15%. Full containment is not expected until Oct. 30, officials say.

Structures have been damaged and losses were expected, according to Vince Pena, unified incident commander with the Los Angeles County Fire Department. However, it wasn't immediately clear how many homes were burned in the fire zone, which stretched across a wide swath between the San Gabriel and Antelope valleys. No injuries have been reported.

Evacuation orders were in effect for residents:

Wyatt Stephenson helped his friend evacuate his home at the top of Juniper Hills.

"We were waiting for the fire to come over the ridge. When it finally came over, we got him out of there," Stephenson said. "We found out later that his house burned. The fire just burned everything."

The Los Angeles County Department of Parks and Recreation announced Sunday that the Nature Center at the Devil's Punchbowl Natural Area was burned by the Bobcat Fire. The facility, which opened in December of 1963, is closed until further notice. The wildlife sanctuary structure, which is the staff's office, was not destroyed.

Last week, the animals from the sanctuary, including snakes, tortoises, Ruth the barn owl and Twig the screech owl were evacuated and the staff was relocated.

"We are deeply saddened of the loss of the Nature Center at the Devil's Punch Bowl Natural Area. It was truly a gem of education for our youth, local community and residents of the County," said Parks and Recreation Director Norma Edith García-Gonzalez. "The residents in the affected neighborhoods are in our thoughts, and we support the firefighters that continue to work tirelessly in the multiple fires."

At around 2:30 p.m. Saturday, the fire was making a hard push west toward Cheseboro Road near the Little Rock Reservoir, and air support was requested to slow it down.

Around 8 p.m. on Saturday, an evacuation warning was issued for south of Pearblossom Highway, east and north of Angeles Forest Highway, north and west of Mt. Emma Road, east and south of Highway 122, and West of Cheseboro Road.

Evacuation warnings were lifted in Monrovia, Bradbury, Sierra Madre, Arcadia and Duarte. Fire crews from those areas believe the Bobcat Fire is no longer a potential threat to residents, officials said.

A Red Cross evacuation center has been set up at Palmdale High School in the Antelope Valley, while the earlier evacuation point at Santa Anita Park for those in the San Gabriel Valley was now closed. Anyone still needing assistance was urged to call the Disaster Distress Hotline at 800-675-5799.

Officials urged residents to be alert for any additional evacuation orders or warnings. Lower temperatures were expected to aid the firefighting effort, however.

"No additional strategic aerial firing will be occurring today near the San Gabriel Reservoir,'' the ANF tweeted Saturday. Large pockets of unburned islands of fuel remain within the perimeter that will be actively burning and producing smoke throughout the day.''

A total of 1,686 personnel are currently assigned to the fire.

"Mt. Wilson is still safe and we will continue to focus on the north end of the fire,'' officials said after daybreak Friday. Fire retardant was placed around Mount Wilson.

The Bobcat Fire is within 500 feet of Mount Wilson, home to SoCal's TV towers and an observatory where 20th century astrophysics was pioneered.

Crews have been working for days to protect the Mount Wilson Observatory and nearby broadcast towers, valued at more than $1 billion, from approaching flames.

Observatory personnel were evacuated. Mount Wilson is not only one of the crown jewels of astronomy but also home to infrastructure that transmits cellphone signals and television and radio broadcasts for the greater Los Angeles area.

A closure order has been issued for all National Forests in Southern California.

The South Coast Air Quality Management District extended its smoke advisory through Sunday, with officials warning that smoke may impact different parts of the region at different times.''

Residents were advised to limit their outdoor exposure as much as possible, and keep doors and windows closed.

The cause of the wildfire remains under investigation.