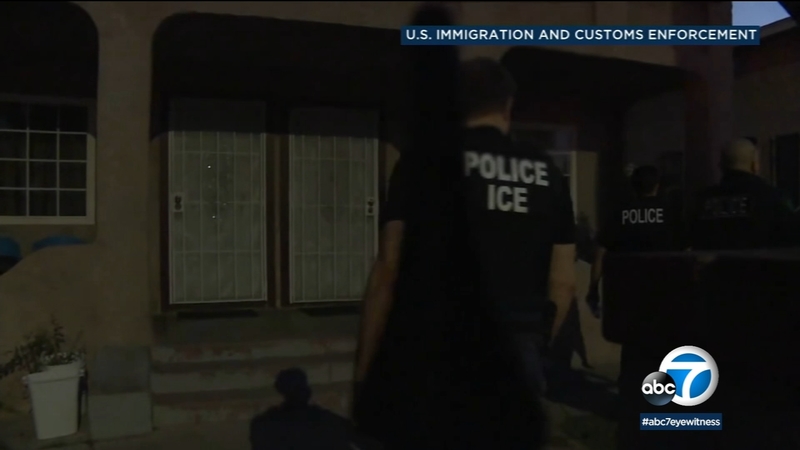 LOS ANGELES (KABC) -- Following the announcement that Customs and Border Protection agents would be deployed across the country in pursuit of migrants in 'sanctuary' cities, Los Angeles leaders are reiterating to the public that California law restricts state and local law enforcement agencies from cooperating with ICE.

"This is a political act to send a specialized, weaponized SWAT team from CPB, as well as ICE, to go into immigrant communities... this is tantamount to a political tantrum," former state senator Kevin DeLeon said at a Friday press conference.

Senate Bill 54, which was signed into California law in 2017, prohibits the agencies from contacting ICE for anything less than serious crimes.

Following the announcement that Customs and Border Protection agents would be deployed across the country in pursuit of migrants in 'sanctuary' cities, Los Angeles leaders are sending a message that the city will not coordinate with the federal government.

"We have SB54. Law enforcement cannot and will not, under the law of California, coordinate with ICE agents," said L.A. Assemblymember Miguel Santiago.

ICE says California law does not supersede federal law and that Congress gives it the authority to arrest people that are in the United States illegally.

"Federal law-enforcement officers can make an arrest for due cause anywhere in the country," said Ira Mehlman from the Federation for American Immigration Reform. "Obviously they have to follow federal law but they don't need the permission of the state or the city or the county to carry out a lawful arrest in Los Angeles."

The Trump administration is deploying agents from the border to "sanctuary" cities that are hindering stepped up immigration enforcement.

ICE says it is now getting subpoenas to get information from local law enforcement.