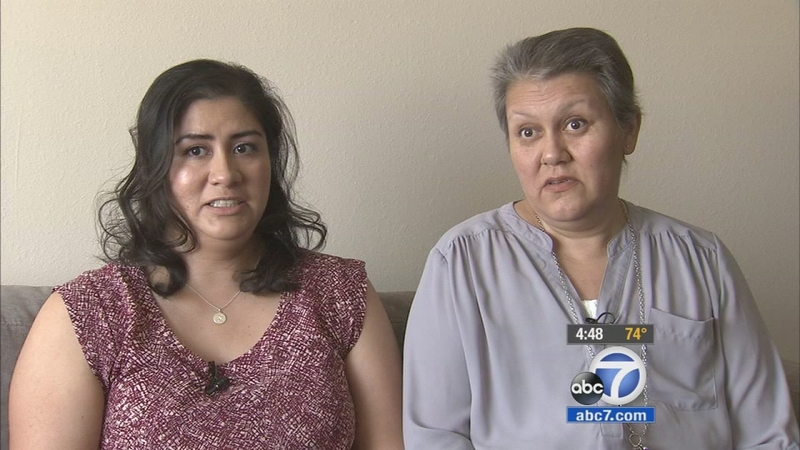 BALDWIN HILLS, LOS ANGELES (KABC) -- Breast cancer is on the minds of many this October, and three local sisters have a story that could save generations.

Three-year-old Sophia doesn't always watch her elbows, and about seven months ago, she bumped her aunt in the chest. That's when 43-year-old Minerva Brambila noticed a lump.

"In a way it's a good thing she kicked me because if she wouldn't have kicked me, I don't know when until I would have got another mammogram," Brambila said.

Brambila's aunt on her dad's side died from breast cancer, so doctors prompted her to get tested for two known breast cancer mutations. She was positive for BRCA2.

Her youngest sister, 33-year-old Adriana, got tested next. She was positive. She did a mammogram.

"That's where they saw a small clump of calcifications, and they biopsied and it came back positive," she said.

On that day their other sister, 39-year-old Maricela, also got tested for the BRCA2 mutation. She also tested positive. Maricela has decided to get a prophylactic mastectomy.

The sisters soon discovered their father carries the mutation.

"Just knowing that our aunt had it was enough to get the ball rolling once we found out that my sister had cancer," Adriana said.

"It so happened that three people in the same family got tested. All of them had it, but it was a 50/50 chance each time; it's like flipping a coin," Kaiser Permanente genetic counselor Monica Alvarado said.

Everyone carries BRCA1 and 2 genes. They are tumor suppressors. But when there's a genetic mutation, genetic counselors like to use the analogy of brakes in your cars.

"As you get older, you're going to wear out that one set of brakes that you had, and eventually you have no brakes," Alvarado said.

Nothing to stop the cancer from growing. As Alvarado points out: knowing now can help generations to come.

Sophia's chance of inheriting the gene mutation is 50/50. But that little bump she gave her aunt will someday save her own life.

"And educate yourself as much as you can," Adriana said.

The sisters were treated at Kaiser Permanente Baldwin Hills. They asked various family members to get tested. It turns out, two of their cousins and one of their nieces are also positive for BRCA2.