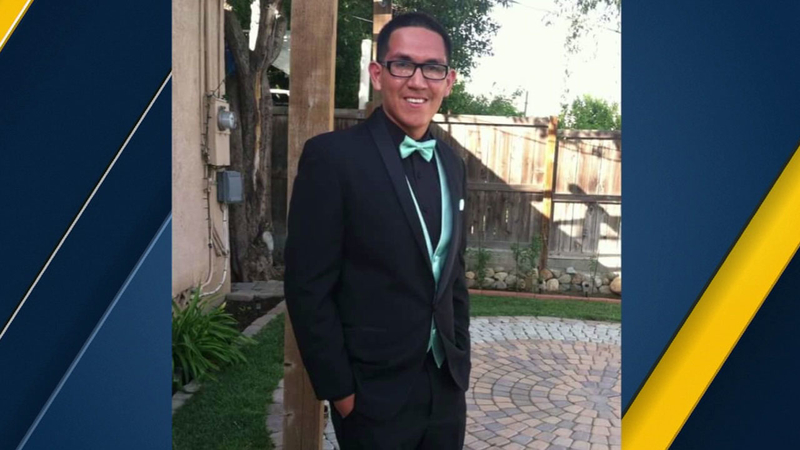 Man remains in coma after 5 Fwy crash in Commerce

COMMERCE, Calif. (KABC) -- A man remained in a coma Sunday following a fiery crash on the northbound 5 Freeway in Commerce that left two of his friends dead and a third in critical condition early Saturday.

Brian Lewandowski, Michelle Littlefield, Tony Miramontes and Alfonso Morillo were on their way back home from Disneyland when they were caught in a chain-reaction crash near the Washington Boulevard exit, the California Highway Patrol said.

Lewandowski, 18, and Littlefield, 19, were killed when a southbound UPS tractor-trailer went over the center divider and struck the Nissan Sentra driven by Miramontes. Both were employees at Six Flags Magic Mountain.

Alfonso Morillo was critically injured in a fiery crash on the northbound 5 Freeway in Commerce on Saturday, Feb. 27, 2016.

Miramontes and Morillo were the sole survivors among the four friends.

"I got a phone call from his mother. We usually always go to the gym together, and I was like, 'No, I haven't heard of anything about him,'" Miramontes' cousin, Steven Gomez said. "I panicked, went over and they said he was in the ICU."

Michelle Littlefield is shown with her mother in an undated photo (left). Scott Treadway appears in an undated file photo (right). Both were killed in a fiery wreck in Commerce.

Authorities say the UPS tractor-trailer was hit by one of two cars racing on the northbound 5 Freeway, causing UPS driver Scott Treadway to lose control.

Treadway was also killed in the fiery crash. The Mira Loma resident was a member of the Teamsters Union.

"Scott was admired and loved by his friends and co-workers at UPS. We are still trying to come to grips with this horrible loss," the union said in a post on its Facebook page.

Lewandowski was the son of a Los Angeles County Sheriff's lieutenant. His family described their son as "an incredible young man and every parent's dream for a son."

"We're a strong family. We're united. We're going to get through this," he said.

One of the street racers, Dealio Lockhart, 35, of Whittier, was taken into custody and could face vehicular manslaughter charges. The second motorist remains at large. He was behind the wheel of a Dodge Charger, authorities said.

Friends of the Littlefield family have set up a CrowdRise account to help raise burial funds. You can donate here: www.crowdrise.com/michellemlittlefieldburialexpenses.