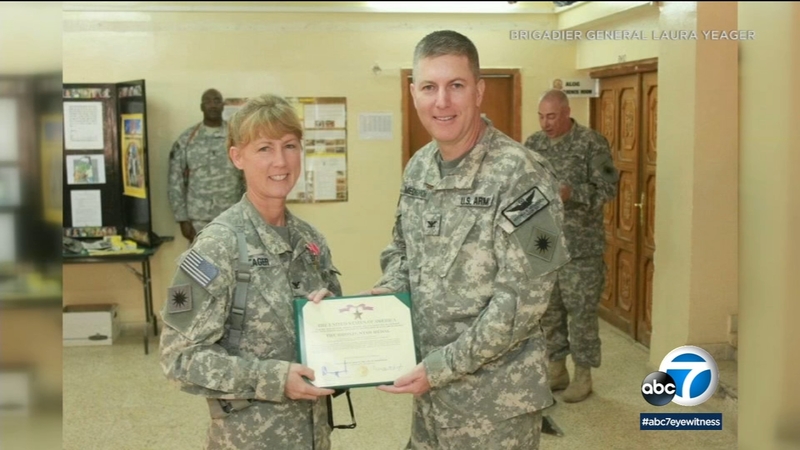 LOS ALAMITOS, Calif. (KABC) -- History will be made at the Joint Forces Training Base in Los Alamitos on Saturday. Brig. Gen. Laura Yeager will become the first woman to lead a U.S. Army infantry division. "I said I would stop doing it the moment that I stopped loving it," said General Yeager. "And over 33 years, I still love it as much as I did that first day of camp back in 1986."

Yeager began her active-duty military service in May 1986, receiving her commission as a second lieutenant from the Reserve Officer Training Corps at California State University Long Beach.

She completed military helicopter training in 1989, and upon completion, she served as UH-60 Black Hawk helicopter aeromedical evacuation pilot.

She left active duty after eight years when her son was born, but she later continued her military career in the California Army National Guard.

While serving in her many leadership positions, she also raised her four boys with her husband, who is also in the military. The general says all of this is still sinking in, but she understands she's a role model. She hopes her experiences encourage other women to chase their dreams.

"Nowhere along the line did anybody look at me and say 'you can't do this because you're a female,'" said Yeager. "Never. I've worked for so many great mentors."

Mentors like her father, who also served as a helicopter pilot and is a retired major general.

"He just pretty much says he's very proud of me, all along the way he's been there for me," said Yeager.

Yeager says her first message to her soldiers will be one of empowerment and appreciation. In the same vein, she encourages those outside of the base to think about pursuing a career in the military.

"You should try this, you should do it, even it's only for one enlistment, you will be a better, stronger person as a result of the experience," said Yeager.