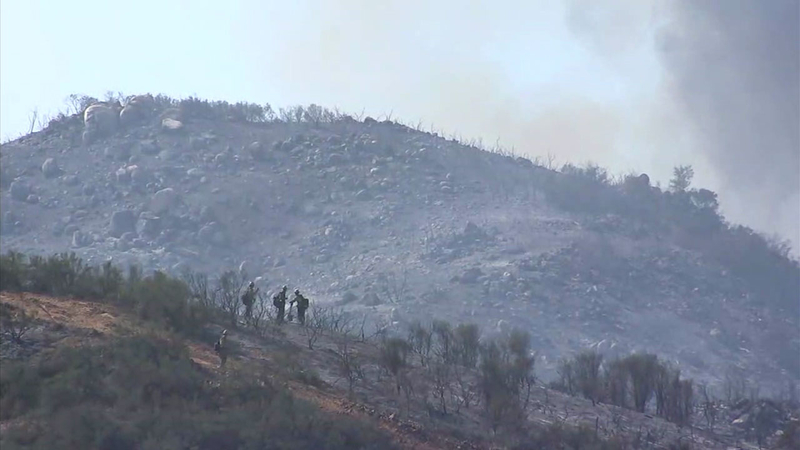 Some residents were ordered to leave the community of La Cresta, just west of Wildomar, as ominous flames raged nearby. Others were under evacuation warnings, meaning they should be prepared to evacuate if necessary. All of those orders were later lifted.

About a dozen horse trailers were seen moving out of the area in the morning, which was marked by ranch homes at the edge of the Cleveland National Forest.

The blaze was sparked by a motorcycle crash south of Lake Elsinore on Thursday afternoon, according to the California Highway Patrol.

It remained 15 percent contained after night-vision equipped helicopters performed water drops overnight and into the morning. Firefighters also set backfires in an effort to gain the upper hand.

There were no reports of injuries, and no structures have been damaged, a Cal Fire spokesman said.

Temperatures in Wildomar reached a high of 94 degrees amid 46 percent humidity, according to the National Weather Service.

Some residents said they feel more at ease because they see that progress has been made.

"The whole hillside was an inferno, it was really bad. If it weren't for Cal Fire being right there, right on top of it, this whole community could have gone," said homeowner Robert Johnson.

South Coast Air Quality Management District officials said weak offshore flow from the north will transition to onshore flow from the south and southwest, bringing smoke and ash into areas near the fire and potentially into nearby areas of Riverside County. They added that air quality may reach unhealthy levels or higher in areas directly impacted by smoke.