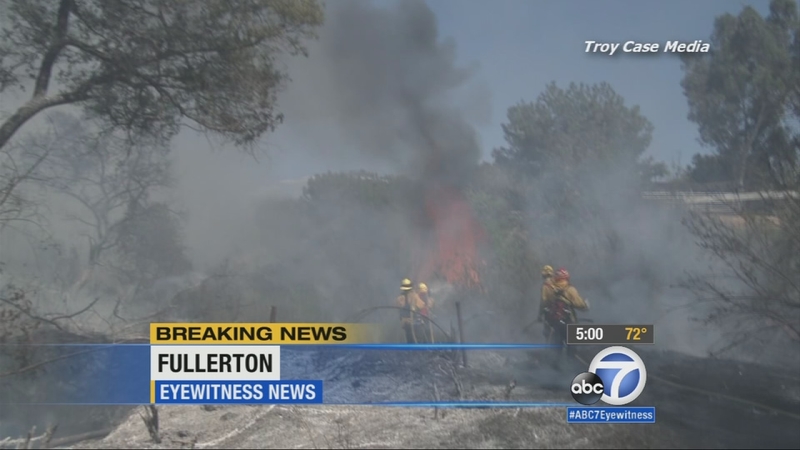 FULLERTON, Calif. (KABC) -- A vegetation fire that broke out near the Brea Dam in Fullerton Saturday afternoon has been contained.

About 100 firefighters and two helicopters from the Fullerton Fire Department and Orange County Fire Authority made quick work of the 12-acre blaze which broke out in the 1700 block of N. Harbor Boulevard around 1:15 p.m.

The fire quickly burned through several acres of dry vegetation, prompting the evacuations of the Fullerton Sports Complex and nearby Fullerton Golf Course.

Officials say the flames came close to some homes, but crews managed to knock down the flames before they caused any damage. Voluntary evacuation orders in place for residents on Sunflower Street and Marion Boulevard were lifted shortly before 5 p.m.

Many nervous residents, however, stayed behind watching as the flames chewed through the brush.

"It was probably about 50 feet or so. It was really close and the neighbors got here before me and so they were telling me that the flames were higher than the house, and luckily the wind shifted," said homeowner Mark Keh.

Smoke from a vegetation fire near the Brea Dam recreation area is seen in Fullerton on Saturday, April 18, 2015.

Smoke from a vegetation fire near the Brea Dam recreation area is seen in Fullerton on Saturday, April 18, 2015.