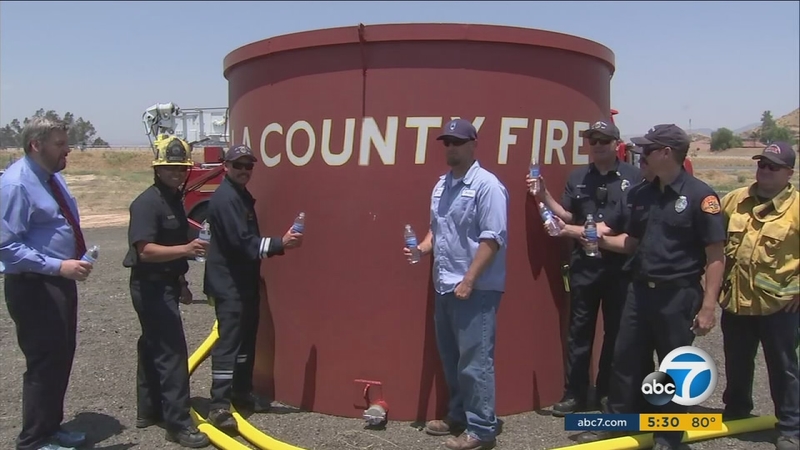 SANTA CLARITA, Calif. (KABC) -- As a rash of brush fires have ignited across Southern California, officials unveiled a plan to make it easier for water dumping helicopters to refill while fighting the frequent blazes.

"We have fires every year out here. It's a constant concern through the fire season," said Matt Stone of the Castaic Lake Water Agency. "The hope is that this will make a difference at some point."

The 9,000-gallon tank would allow helicopters to lower a tube and suck up the water instead of having to fly far away to replenish.

Smaller canisters called "pumpkin tanks" are already set up in other fire-prone parts of the county, including Topanga Canyon.

The idea is to get water-dropping helicopters the water they need at a faster pace.

"They can just come in and snorkel directly. They don't have to land," said Captain Keith Mora of the LA County Fire Department. "Snorkel directly from the tank and get going again. And it shaves about a minute off every landing time."

One minute may not sound like a lot of time, but officials said when it comes to wildfires, a minute can make all the difference.

"A minute is a lot, especially in a rotation of water drops on a brush fire," Mora said. "A brush fire can grow rapidly and race on us."

The fire department said this is one of the first of larger-style tanks being deployed. They're being set up next to hydrants so they can be constantly topped off during a firefight.