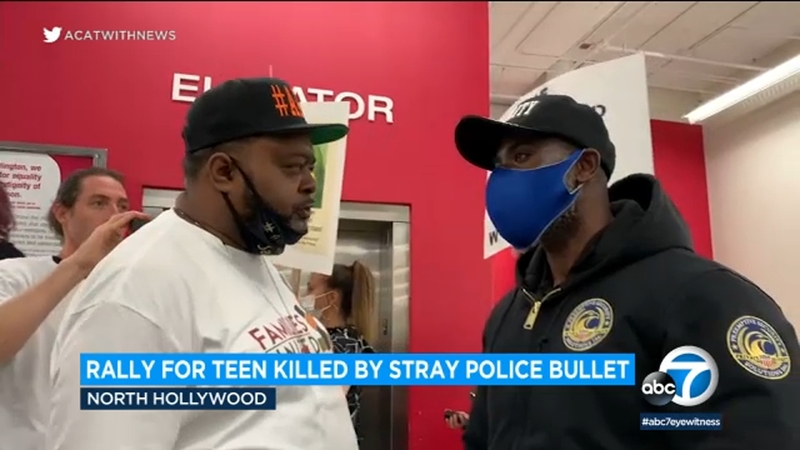 NORTH HOLLYWOOD, LOS ANGELES (KABC) -- The father of Jacob Blake, who was shot by a Wisconsin police officer in 2020 and was left paralyzed, was one of several people who joined a rally in North Hollywood on Sunday to support the family of Valentina Orellana Peralta.

Peralta, a 14-year-old who came to Los Angeles from Chile, was shot and killed in December inside the Burlington store on Victory Boulevard when an officer fired at a suspect and a bullet pierced a wall.

LAPD was responding to calls of a man with a gun, but the 24-year-old suspect - who was also shot and killed by police - didn't have a gun. He was armed with a bike lock. The teen and her mother were in the fitting room when one round went through the dry wall, striking Peralta.

Blake's father, Jacob Blake Sr., walked through the aisles of the store alongside demonstrators, calling on L.A. police to make changes within the department to avoid another deadly shooting.

He said he traveled to L.A. to help the family of Peralta. Family and friends of Breonna Taylor and George Floyd - who were also killed at the hands of law enforcement officers - were also in attendance.

On Aug. 23, 2020, Kenosha Police Officer Rusten Sheskey fired seven times at Blake after responding to a report of a domestic dispute, according to authorities.

Civil rights charges will not be pursued against the Wisconsin police officer who shot Jacob Blake last year, partially paralyzing him.

Last month, L.A. Police Chief Michel Moore along with the L.A. Board of Police Commissioners, the five civilians who oversee the police department, vowed to conduct a thorough investigation into the death of Peralta.

"I am profoundly sorry for the loss of this young girl's life, and I know there's no words that can relieve the unimaginable pain for the family," Moore said. "My commitment is to conduct a thorough, complete, and transparent investigation into the circumstances that led up to this tragedy and provide the family and the public with as much information as possible. Additionally, our review will also include an examination of our policies, training, and protocols involved in this shooting with an eye towards what can be done to avoid such a terrible accident in the future."

The Los Angeles Police Department has released body camera footage of a shooting that killed a 14-year-old girl at a Burlington store in North Hollywood.