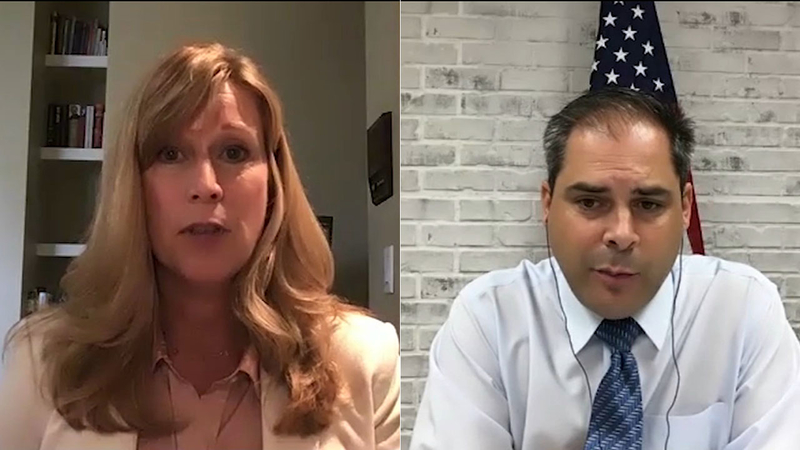 California's 25th congressional district, which encompasses northern Los Angeles County and the eastern part of Ventura County, could potentially have its fourth representative in two years after this election.

The seat is once again one of the most competitive races in the country, a spot that first opened up after Rep. Katie Hill resigned.

Hill had unseated incumbent Rep. Steve Knight in 2018, then resigned in 2019 amid allegations of an inappropriate relationship with a staff member, and the leak of intimate photos.

In a fiery farewell speech, Rep. Katie Hill suggested a double standard forced her resignation amid a bitter divorce.

Then Republican Mike Garcia, a businessman and former Navy pilot, won the special election in May 2020 against state Assemblywoman Christy Smith.

That special election filled the seat until the November election.

Garcia, now the incumbent congressman, isn't taking anything for granted as he faces Smith again.

"We are in a very purple district so I can't run and win by touting myself as only a Republican," Garcia said.

That might hurt Garcia if former Vice President Joe Biden carries the district.

A presidential election wasn't on the ballot back in May. Smith believes the reason she lost was because of low voter turnout, something she's less concerned about this time around.

"We have not in the Democratic Party yet figured out how to have our voters be persistent in off-cycle elections and special elections so this is something we really need to work on," Smith said. "So I think expanding the franchise, making voting as easy and as accessible as possible is part of the solution."

In this election, out of the 440,000 ballots mailed out to voters in the 25th district, 30% have been returned as of this week, according to Political Data Inc. About 49% of the ballots returned belong to registered Democrats with 27% Republicans and 23% independents.

"There's going to be a lot of folks, Democrats in this case who do vote for Biden but end up voting for me. It's not because my values align to Joe Biden's. It's because they're pissed off about the policies in California and it's really hurting their jobs," said Garcia.
But Smith says in Garcia's five months in Washington, he hasn't shown voters he's the best candidate to help them address the struggles of the pandemic.

"He voted against a negotiated second round version of the CARES Act and that's inexcusable," Smith said. "We have businesses now that need economic support. We have families whose unemployment benefits have expired. It is unfathomable to me in this moment why he hasn't stepped up to the plate, crossed party lines and done the right thing for this district."