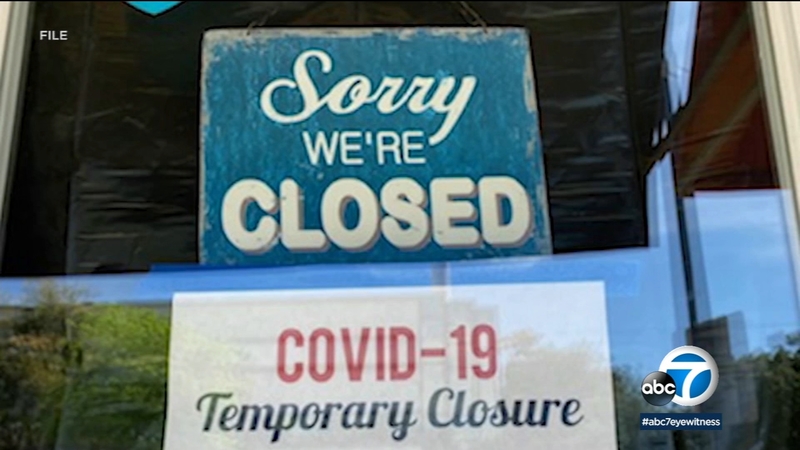 Following a hearing that lasted more than an hour, Los Angeles Superior Court Judge James Chalfant upheld an earlier tentative ruling, in which he found that the county "failed to perform the required risk-benefit analysis" before enacting the ban.

"By failing to weigh the benefits of an outdoor dining restriction against its costs, the county acted arbitrarily and its decision lacks a rational relationship to a legitimate end,'' Chalfant wrote in his ruling, which stemmed from lawsuits filed by the California Restaurant Association and the owner of the downtown Engine Co. No. 28 restaurant, attorney Mark Geragos.

As California hospitals struggle amid a surge in coronavirus cases, state officials imposed a new stay home order on more than 33 million people.

"The balance of harms works in petitioners' favor until such time as the county concludes after proper risk-benefit analysis that restaurants must be closed to protect the healthcare system,'' Chalfant wrote.

Although Chalfant had already penned the 53-page tentative ruling and upheld it during the hearing, attorneys for the California Restaurant Association are expected to craft a shorter document that Chalfant will sign, making the order official.

The judge noted in his ruling that the county did show surging COVID-19 cases are "burdening the health care system and action is necessary." He also said the county has presented "generalized evidence" of transmission risk from outdoor dining.

But he said the county's assertion that the virus can be spread in restaurants by patrons spending extended periods of time without masks "only weakly supports the closure of outdoor restaurant dining, because it ignores the outdoor nature of the activity, which the CDC (U.S. Centers for Disease Control and Prevention) says carries only a moderate risk, and less with mitigations.''

While siding with the restaurant industry, Chalfant noted that due to the state's regional stay-at-home order that took effect Sunday night -- and which also includes a ban on in-person dining -- "outdoor restaurant dining in the county cannot open at this time."

Chalfant instead enjoined the county from imposing its dining ban beyond the original three-week time period, which ends Dec. 16. The state's order at a minimum will be in place until Dec. 27. But Chalfant said the county -- which is obliged to adhere to the state's order -- can only extend the restriction beyond that "after conducting an appropriate risk-benefit analysis."

Chalfant wrote that he can't dictate what that analysis should entail, but suggested that the county "could be expected to consider the economic cost of closing 30,000 restaurants, the impact to restaurant owners and their employees and the psychological and emotional cost to a public tired of the pandemic and seeking some form of employment in their lives.''

Chalfant said during the hearing he was surprised that no study has been done at any government level since the outbreak began about the alleged effects of outdoor dining on the spread of the coronavirus. He also said the average healthy person is not severely at risk of dying of the virus.

The county Department of Public Health imposed the ban on Nov. 25, citing surging COVID-19 cases and hospitalizations. The county Board of Supervisors debated the issue on Nov. 24, but voted 3-2 to support the ban, arguing that restaurant patrons spend extended periods of time in close proximity and without wearing masks.

The California Restaurant Association and Geragos, however, challenged the ban in court.

"The recent order with no stated scientific basis from L.A. County singles out a specific industry and could jeopardize thousands of jobs,'' Jot Condie, president/CEO of the California Restaurant Association, said in a statement announcing the lawsuit. "There are thousands of restaurants and many thousands more employees who could be out on the street right before the holiday season.''

Geragos told Chalfant he will bring another lawsuit, this time challenging the state order.

Prior to the ban on outdoor dining being imposed, the county had already restricted restaurant patios to 50% of capacity.

The ban on in-person dining has been met with an outcry from restaurant owners across the county, with some saying they spent thousands of dollars to establish safe outdoor dining spaces under the previous county guidelines, only to be forced to shut down on Nov. 25 without justification.

Opponents of the ban have said it would cause tens of thousands of restaurant workers to lose their jobs. There are more than 30,000 restaurants in Los Angeles County.

Attorney Amnon Z. Siegel, on behalf of the county, told the judge that with the uptick in coronavirus cases, "we are in scary new territory'' and the number of ICU hospital beds continues to dwindle. He said the county by law was not required to do a risk-benefit analysis.

Chalfant said he recognizes the seriousness of the hospital bed problem, but insisted there is no concrete evidence that banning outdoor dining will help.

The judge, who acknowledged he has had struggled to keep his own personal beliefs out of the discussion, also said departments within the county other than the Department of Public Health should be involved in fighting the pandemic. He said he does not believe officials when they say there are manpower shortages in dealing with the problem, and he also predicted that the state's stay-at-home order will not work.