Newsom: CA 'getting closer' to issuing reopening guidance for Disneyland, other theme parks

Gov. Gavin Newsom says California is "getting closer" to issuing guidelines for theme parks, which have been closed since mid-March and are pushing the state to tell them when they can reopen.
KABC 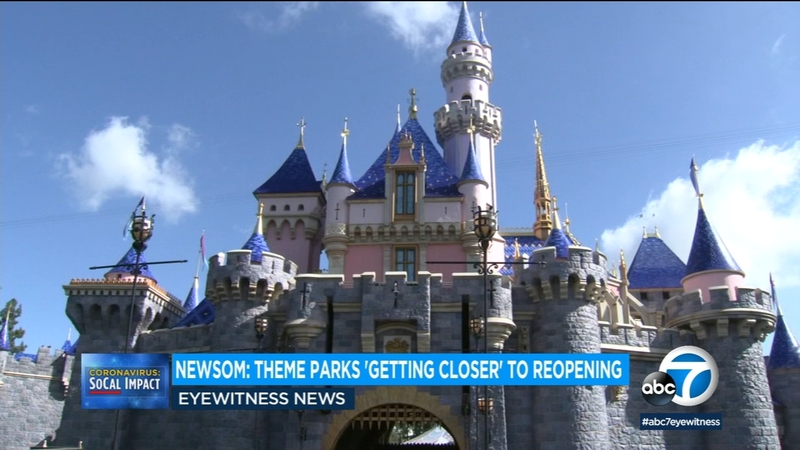 CA 'getting closer' to issuing reopening guidance for theme parks

According to The Orange County Register, the governor says conversations are ongoing with major amusement park operators.

For the second time in less than a week, Disney is tightening mask requirements in Downtown Disney.

California officials did not issue guidance for theme parks as part of the four-tier color-coded system for tracking COVID-19 trends. The new system will determine when counties can move forward with business reopenings as we head into flu season.

Disneyland has said once guidelines are released, the resort will work with the state and county toward a reopening date.

Meanwhile, U.S. theme parks are still finding it tough to bring back guests this summer despite the wide number of safety measures they've put in place.

This was the first time since the park's shutdown.

Attendance has been less than expected across the industry.

Some parks are reducing operating days, slashing ticket prices, and closing early for the year. Disney this week will begin cutting an hour or two from each day at its four Florida theme parks.

Now, there are worries over what the virus will bring this fall. The industry put in long hours just to restart this season, adding constant reminders about social distancing, from decals on the pavement in queues to roving "social distance squads" at Disney World. Six Flags added touch-free bag checks with high-tech, walk-through machines.

Six Flags expects its numbers to rebound when the health crisis settles down, Mike Spanos, the company's CEO said at the end of July. But attendance at its parks around the U.S. has gone up and down depending on whether there are coronavirus surges in those areas, he said.