EDD tells young woman to prove she's a real worker, then locks her out as deadline approaches

The EDD says about a million Californians are required to submit extra proof they qualified for unemployment - or pay it all back.
KGO
By Michael Finney 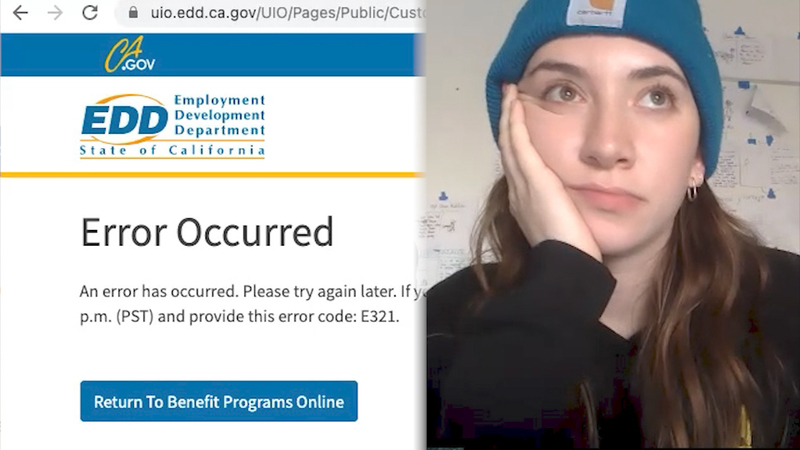 EDD tells woman to prove she's a real worker, then locks her out

MORGAN HILL, Calif. -- The U.S. Department of Labor has agreed not to make workers repay benefits they received by mistake during the pandemic, as long as they were not obtained by fraud.

However, the Employment Development Department still must verify that everyone was eligible -- about a million Californians are required to submit extra proof -- or pay it back.

Many say the EDD isn't making it easy.

Now they must show they really were working, and weren't imposters filing phony claims.

But many say the EDD is once again putting up barriers.

Colette Bowen of Morgan Hill has been trying for weeks to show the EDD proof that she really was working at a Kendra Scott Jewelry Store when the pandemic hit.

"I do have evidence, I just cannot get it to them," she said.

"And then everything shut down, and then they let us all go," Bowen explained.

Bowen was a college student working part time at the mall when stores shut and she got laid off.

The EDD is going back to those who received federal benefits and asking them to prove they deserved them -- or pay it all back plus a 30% penalty.

The EDD granted her pandemic unemployment benefits -- but now, nearly two years later, she must prove she deserved them.

"I was pretty annoyed just because I knew this would be another thing I had to deal with," Bowen said.

Bowen is among the nearly 1 million workers who received an alarming email from the EDD before the holidays. All of them must show they were really working before the pandemic hit, or return the money.

Bowen only recently found the email in her junk folder.

"When I got these emails that went to my junk folder it just became very stressful," she said. "At first, I thought it was just kind of a scammer trying to get me to give my Social Security number or something."

The email said she must upload proof to her EDD account -- or pay back her benefits. That's about $6,000. As Bowen tells us, she's not in the kind of position to pay back such a huge sum.

"Um, that is definitely a big amount. I mean, I'm a young person, I work an hourly wage job," she said.

She dug up her W-2 and earnings summary. But when she tried to upload them, she could not.

"I get the error code every time," she said.

As it turns out, the EDD locked her out of her account, with no way to upload documents, and a deadline of this Friday to submit her proof.

Bowen is frustrated with EDD's refusal to budge their deadline.

"It's not like I just decided to ignore their requests. I just sincerely cannot get into my account," she said.

The EDD's response to the man whose claim was rejected and sent to appeals: "We unfortunately did not respond on time."

She's tried calling the EDD many times. No one picks up. She mailed paper copies to the EDD - no response.

Finally, she contacted our sister station in San Francisco, KGO-TV.

We asked the EDD how she is supposed to comply if they locked her out of her account.

The EDD said it will be offering a way to mail in documents for those with technical problems, but would not say why she was locked out.

A spokesperson said the EDD won't demand money back for the time being, even if a deadline has passed.

RELATED: Assm. Patterson suspects scammers are trying to use his office in potential EDD fraud scheme

But Bowen is still locked out, and is still worried.

"I'm not in a position where I could pay back that sort of money, and I know that I'm not at fault, and I shouldn't have to be. It's definitely been stressful," she said.

The EDD says many folks may have been overpaid by mistake as rules kept changing during the pandemic -- the Labor Department said today it will forgive many of those undue payments.

However, folks like Bowen must still show they were really eligible at all.