California's voters still do not reflect the diversity of its people, report says 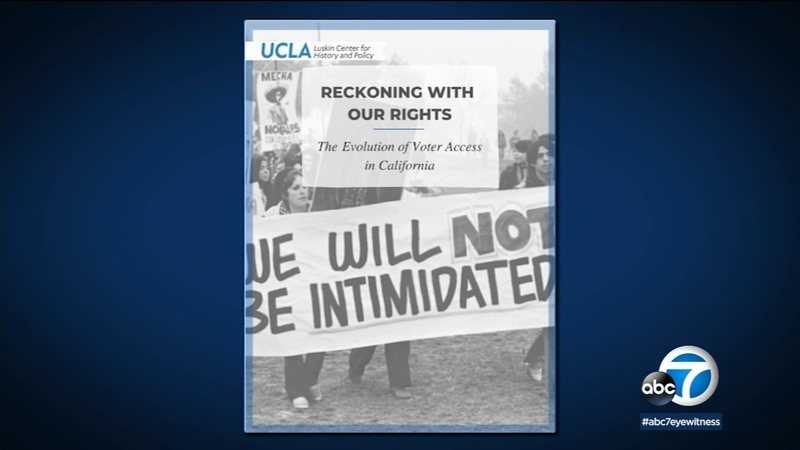 LOS ANGELES (KABC) -- California has come a long way when it comes to voting rights, but a recent report notes that its voters still do not reflect the diversity of its people.

From automatic vote-by-mail ballots, to automatic registration through the DMV, California has made voting more accessible.

"When we look at the avalanche of restrictive voting bills that are being introduced in states across the country, California stands alone," said UCLA Latino Politics and Policy Initiative founding director, Sonja Diaz. "I say that because state lawmakers have focused on expanding access to the franchise, and the ballot box."

A recent report by the UCLA Luskin Center for History and Policy highlights California's voting rights history, and where it is now.

"What we found out was that the history of voter access in California is actually a lot more complicated, and a lot less sort of unidirectional," said Alisa Belinkoff Katz, Senior Fellow at the UCLA Luskin Center for History and Policy.

The report highlights voter suppression in the 18th and 19th centuries. Chinese immigrants and Native Americans affiliated with the tribe could not vote. There was an English literacy test, and registration was not permanent.

"There were steps that had the effect of excluding low-income people from the vote," said Belinkoff Katz.

Despite the major strides since the late 1950s, the Voting Rights Act of 1965, and the state's own Voting Rights Act in 2001, the report stresses, "California voters do not reflect the diversity of its people," skewing toward older, white, more wealthy voters. One persistent challenge is language access.

"With my research, I found that many counties don't seem to use translators. Rather, websites are just automatically Google translated," said UCLA PhD political science candidate Izul de la Vega.

She stresses grassroots organizations are key.

"Those types of organizations deserve more attention, deserve to be amplified because they're the ones actually doing the outreach, the grassroots outreach to communities," said de la Vega.

"Those languages vary based on the population that is in each of those counties. So we want it to be tailored, and cultivated for the particular communities that are represented in that county," said AAAJ-LA CEO Connie Chung Joe.

"Make sure that our residents understand, you know, offices, races, elections," said communications director Marsha Mitchell. "What the measures really mean in layman's terms, and how they impact our daily lives."

UCLA Latino Policy and Politics Initiative is dedicated to research, advocacy, and litigation.

"There's still some communities because of the color of their skin, or their class, or their zip code, that are being left out," said Diaz.

One key issue the group is tackling is the importance of data driving the redistricting still happening at a local level. It's the redrawing of political boundaries that only happens once every 10 years.